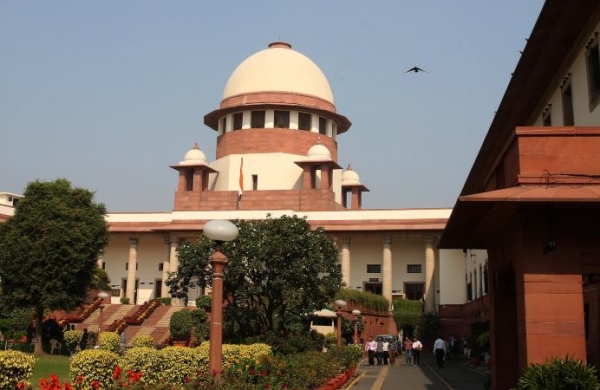 By PTI
NEW DELHI: The Supreme Court Monday sought the Centre’s reply on pleas seeking ex-gratia compensation of Rs 4 lakh to the families of those who have died of COVID-19 and said that there should be a uniform policy for issuing death certificates to those succumbing to the deadly virus.

A vacation bench of Justices Ashok Bhushan and M R Shah also asked the Centre to place before it the ICMR guidelines on death certificates for COVID-19 victims, saying there should be uniform policy for issuing such documents.

Additional Solicitor General Aishwarya Bhati, appearing for the Centre, sought time to obtain instructions and bring all relevant materials regarding the scheme under Section 12(iii) of the Disaster Management Act, 2005 as well as the letter dated April 8, 2015 issued by Ministry of Home Affairs (MHA) with regard to compensation.

“The policies or guidelines regarding issuance of death certificate with regard to patients, who were infected with COVID19, may also be brought on the record including the guidelines issued by the ICMR. As prayed, 10 days’ time is granted to learned ASG to file counter affidavit”, the bench said while listing the matter for further hearing on June 11.

The apex court was hearing two separate pleas seeking directions to the Centre and states to provide Rs 4 lakh compensation to the families of coronavirus victims as provisioned under the Act, and a uniform policy for issuing death certificates.

The bench said unless there was a uniform policy for issuance of any official document or death certificate stating that the cause of death was COVID, the kin of the victims would not be able to claim benefits of any compensation scheme, if given.

Justice Shah asked Bhati, whether there is any uniform policy on death certificates as there are many situations of death, where reason is not given as COVID.

The bench said that State government authorities are saying that they are following ICMR guidelines.

“So you (Centre) place the ICMR guidelines before us and tell us about any uniform policy on issuance of death certificates to the COVID-19 victims,” the bench added.

Justice Shah pointed out that in many cases deaths are due to lung infection or heart problem but it may have happened due to COVID-19 and it is not mentioned in the death certificates.

“People will have to run from pillar to post, if any compensation is to be given to kin of COVID-19 victims. It is not fair for the family as the reason for death is often a different one when the death has actually occurred due to COVID,” the bench said.

At the outset, advocate Gaurav Kumar Bansal, who appeared in-person, said that under section 12(iii) of the Disaster Management Act, 2005, every family whose member died due to disaster is entitled for ex-gratia compensation of Rs 4 lakh.

Bansal said that since COVID-19 has been declared as a disaster and as per the order dated April 8, 2015, every family whose member dies due to disaster is entitled for ex-gratia compensation of Rs 4 lakh.

He said that hundreds of persons (like personnel providing services in healthcare departments, police department, municipal department) who were involved in relief operations or were associated to combat COVID-19 virus have also lost their lives and in many cases, these persons were the “sole bread earner” for the entire family.

He further argued that after the demise of a person due to COVID-19, their family members are running from pillar to post for all kinds of help.

Senior advocate S B Upadhyay, appearing for petitioner Reepak Kansal who has also field a similar petition, said that large number of deaths are taking place due to COVID-19 and death certificates needs to be issued and after that they can claim compensation under section 12 (iii) of the Act.

The bench asked Upadhyay whether any payment had been made by any of the states.

Upadhyay replied that it has not been paid as the scheme for compensation ended last year and a similar scheme needs to be implemented, as a lot of families have suffered a loss due to the pandemic.

He said that was another letter issued on March 14, 2020, which said that to give benefit under NDMA Act, the disaster has to be a natural one and COVID has been notified as a disaster.

The bench said that the government has to come up with a scheme in this regard.

Kansal in his plea has said that states should be directed to fulfil their obligation to take care of victims of COVID-19 and also their family members.

The plea alleged that hospitals are not conducting post-mortem of those who are dying due to COVID-19.

“There is a constitutional and legal obligation on the state and its different organs to take care of victims of the calamity and their family members, in the position of a guardian or parent of the people of the society,” it said.

Fresh COVID-19 infections in India dipped to 2,22,315, the lowest in around 38 days, pushing the total tally of coronavirus cases to 2,67,52,447, while the death toll crossed the 3-lakh mark, according to the Union Health Ministry data updated on Monday.