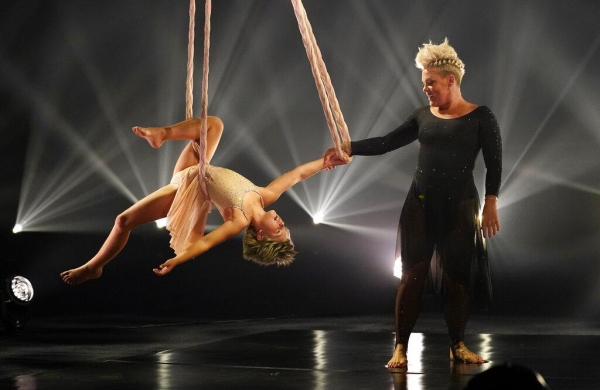 By Associated Press
NEW YORK: It was a family affair at the Billboard Music Awards: Pink twirled in the air in a powerful performance with her daughter, and Drake was named artist of the decade, accepting the honor alongside his 3-year-old son.

Drake, who extended his record as the most decorated winner in the history of the awards show to 29 wins Sunday, was surrounded by family and friends who presented him with the Artist of the Decade Award. He walked onstage outside the Microsoft Theater in Los Angeles with his son Adonis holding his hand.

“I wanna dedicate this award to my friends, to my longtime collaborators … to my beautiful family, and to you,” he said, looking to Adonis and picking him up to kiss him.

Pink received the Icon Award and was joined onstage by her 9-year-old daughter — showing off their powerful gymnastic skills as they spun in the air in a jaw-dropping performance. Known for her signature aerial and acrobatic moves, Pink was matched by Willow Sage Hart as “Cover Me In Sunshine” played in the background, Pink’s song featuring vocals from her daughter.

“Willow, you nailed it,” Pink said after the performance. “I love what I do and I love the people that I get to do it with, and we’re pretty good at what we do, but it wouldn’t matter if no one came to see us and play with us. So all you guys out there … thank you for coming out!”

Pink’s performance was one of several pre-taped moments at the awards show, which aired on NBC and was hosted by Nick Jonas. Live performances were held outdoors, in front of feverish audience members wearing masks.

The Weeknd was on hand to accept the most wins of the night — 10. He walked into the show with 16 nominations, winning honors like top artist, top male artist, top Hot 100 song for “Blinding Lights” and top R&B album for “After Hours.”

“I wanna take this opportunity to thank you, my parents,” he said. “I am the man I am today because of you. And thank you to my fans, of course. I do not take this for granted.”

The late rapper Pop Smoke was also a big winner: He posthumously earned five honors, including top new artist and top rap artist, while his debut — “Shoot for the Stars, Aim for the Moon” — won top rap album and top Billboard 200 album, which his mother accepted onstage.

“Thank you to the fans for honoring the life and spirit of my son, so much that he continues to manifest as if he was still here in flesh,” Audrey Jackson said.

Another late rapper was also honored during the show. Before presenting top rap song to DaBaby, Swizz Beatz dedicated a moment to those who have recently died in hip-hop, including his close friend and collaborator DMX. And Houston rapper and activist Trae Tha Truth, who earned the Change Maker Award, ended his speech with a powerful sentence: “We still gon’ need justice for Breonna Taylor.”

“Oh my gosh. Thank y’all so much. This means so much to me,” Barrett said as she broke into tears. “I’ve been performing for 10 years really hard. …We’ve worked so hard to get here.”

Another country star also won big Sunday though he wasn’t allowed to participate in the show.

Morgan Wallen, who was caught on camera using a racial slur earlier this year, won three honors, including top country artist and top country album for “Dangerous: The Double Album,” which has had major success on the pop and country music charts despite his fallen moment.

Wallen was nominated for six awards, and Billboard Awards producer dick clark productions said it couldn’t prevent Wallen from earning nominations, or winning, because finalists are based on album and digital sales, streaming, radio airplay and social engagement. The producers did ban Wallen from performing or attending the show.

The Billboard Awards kicked off with a collaborative performance by DJ Khaled, H.E.R. and Migos, who brought the concert vibe back to life a year after live shows were in the dark because of the pandemic. Doja Cat and SZA — accompanied by futuristically dressed background dancers — sang their big hit “Kiss Me More” inside the venue, where the seats were empty. Alicia Keys, celebrating the 20th anniversary of her groundbreaking debut “songs in A minor,” sang songs from the album including the hit “Fallin’.” The performance was introduced by former first lady Michelle Obama.

Stars like Taylor Swift, Lady Gaga and Kanye West won honors at the show though they didn’t attend. Machine Gun Kelly, who started in rap but has had recent success on the rock charts, won top rock artist and top rock album.

“I released my first mixtape 15 years ago and this is the first big stage I’ve ever been invited to accept an award on,” he said, kissing his actor-girlfriend Megan Fox before walking to the stage.

“To the box that society keeps trying to put me, you need stronger material because you can’t keep me in it,” he proclaimed.

Film on ‘Beasts of Prey’ in development at Netflix