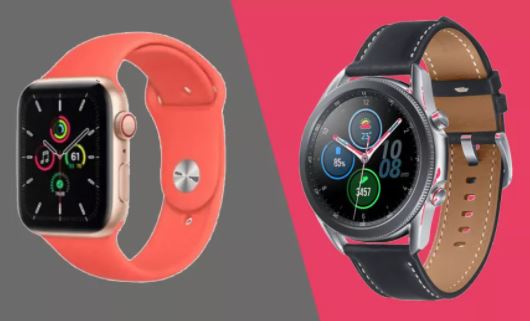 And, of course, there’s the not-so-small matter of the Apple Watch SE being designed for use with an iPhone and the Samsung Galaxy Watch 3 pairing up better with an Android device. The latter will still work with an iPhone though, you just lose some functionality.

Both support standard training features for active users, with fitness tracking being extensive on both devices, along with GPS tracking and heart rate monitoring. In the case of the Samsung Galaxy Watch 3, you even get things like an ECG and blood oxygen monitoring. So they have a lot of similarities and just as many differences.

With both devices available for about the same price, which one is the best to go for, and does it matter what phone you want to pair it with? Let’s take a look.

Of course, if you want to stretch yourself a little further you can opt to buy the Apple Watch SE with different straps, which pushes the price up.