‘Punish me, but absolve poll body of doubts’: CEC Rajiv Kumar in affidavit that couldn’t be filed 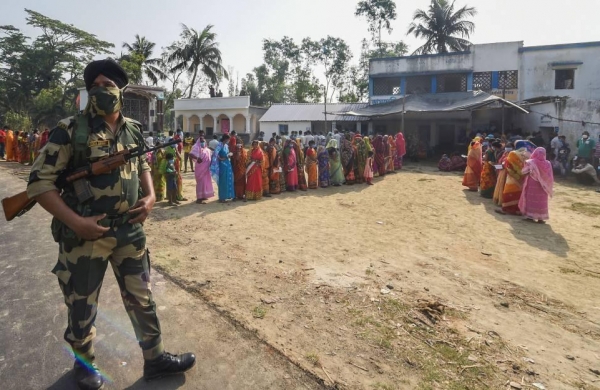 By PTI
NEW DELHI: Deferring some phases of the recently-held assembly polls due to the coronavirus pandemic could have led to a situation where holding the remaining phases under President’s rule would have triggered sharper criticism about the poll panel favouring one party against another, Election Commissioner Rajiv Kumar said in a draft affidavit which he planned to file in the Madras High Court and later in the Supreme Court.

In the draft affidavit, which could not be filed due to procedural reasons, Kumar also offered to quit and volunteered for personal punishment, saying that the institution “needs to be absolved of the doubts cast on it to save the democracy” lest everyone else start making insinuations and allegations in much more magnified, exponentially derogatory terms”.

Sources said Kumar had proposed to file this affidavit in response to observations made by the Madras High Court that the poll panel was singularly responsible for the surge in COVID-19 cases and murder charges be put on its responsible officers.

The draft affidavit did not form part of the Election Commission of India’s application filed in Madras High Court and its plea in the Supreme Court seeking expunction of the remarks made by the high court, but the apex court did not allow the plea, saying the oral observations were not part of “official judicial record” and hence there was no question of expunging them.

Sources in the EC said an “additional affidavit” by Kumar was technically not possible at that time as per the advice of the counsel.

When contacted, Chief Election Commissioner (CEC) Sushil Chandra told PTI, “At this time of the coronavirus pandemic, we should all work for the care of those suffering from COVID-19 and this particular issue (of Madras High Court making observations against the EC) has been settled by the honourable Supreme Court and the ground of the Commission has been allowed.

It has been upheld that the comments by the Honourable Madras High Court were absolutely inappropriate. the issue has been settled by the SC.”

“My request is that every person should work towards fighting the pandemic rather than talking about any of these issues, especially when the matter has been settled by the SC,” Chandra said.

Sources said the ‘miscellaneous application filed before the Madras HC and the SLP before the apex court was duly approved by both CEC Chandra and EC Kumar.

Chandra was Chairman of the Central Board of Direct Taxes (CBDT) before joining the poll panel.

Kumar has previously held positions of Financial Services Secretary and Finance Secretary, where he is known to have played a critical role in brokering peace between the RBI and the government over sharing of excess reserves of the central bank.

“Be it recapitalisation of PSBs, the economic capital framework for RBI which was finalised by the Expert Committee under the chairmanship of Bimal Jalan after Kumar became its member upon his being appointed as Finance Secretary, or the legislative changes for strengthening the regulation and supervision of cooperative banks, I found that he displayed a problem-solving approach that hinged on maintaining and promoting institutional strength and integrity” former RBI Deputy Governor N S Vishwanathan said.

Referring to Kumar’s tenure in Finance Ministry, the Indian Banks’ Association CEO and former managing director of Punjab National Bank Sunil Mehta said he saved the reputation and integrity of the banking system by providing support in the form of capital, cleaning up the balance sheet and initiating various reforms.

Institution of PSBs and for that matter entire banking owes a lot to him, Mehta added.

In the draft affidavit, Kumar is learnt to have said that clubbing of phases in the West Bengal polls to curb the spread of COVID-19 was also not possible under the provisions of the Representation of the People Act.

Kumar volunteered for punishment on a personal basis and appealed that the accusations on the institution may be taken back.

He said that nearly 11 lakh personnel deployed in recent elections, many of whom were frontline workers facing COVID-19 onslaught, would be demoralised and cannot be “a mute spectator to such downgrading of an institution”.

He is understood to have said that as an election commissioner he cannot escape his individual responsibility and wanted to leave it to the judgement of the court to punish in the manner the court was pleased to so decide.

The option of deferring some phases was also actively considered.

However, if, even temporary disfranchising of voters was considered as an option, the massive hue and cry and popular discontentment it could have caused were also taken into account, he said in the draft.

Implications of not completing elections timely, possibly leading to a situation of conducting at a later stage under extended-term or President’s rule might be much more damaging and attract sharper objections of favouring one and acting against another, he said in the draft affidavit.

Kumar underlined the fact that many of those working for the elections have lost their near and dear ones during their period of duty.

Kumar said that when “murderers”, the description used by the High Court, head or remain part of the ECI, voters in general and contesting candidates and political parties, in particular, cannot trust it to hold free, fair, transparent elections.

Talking about far-reaching implications in such a scenario, Kumar said if candidates start doubting results outside a counting hall due to lack of faith in ECI, the kind of law and order the country would face is unimaginable.

Calling for respect among institutions, he is understood to have said that unfortunately, of late civility and respect for mutual domains is increasingly becoming the greatest casualty in public and political discourse, making it difficult to conduct elections or for that matter to take any policy decision by any institution or regulatory authority.

The mutual respect, restraint, civility in the level of discourse at least amongst the national and constitutional institutions meant to protect the very democracy and the rule of law cannot be or perceived to have been given up, he is learnt to have said.