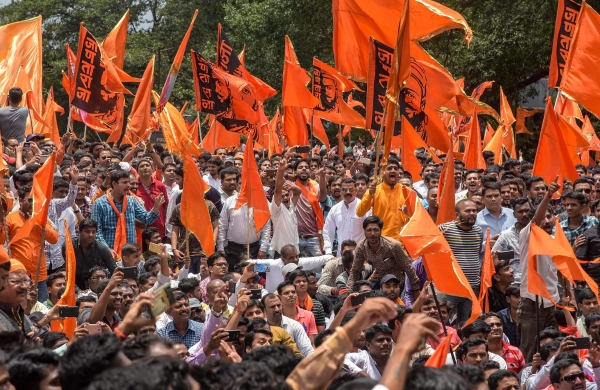 By PTI
MUMBAI: Terming the Supreme Court’s decision to strike down the Maharashtra law granting quota to Marathas in admissions and government jobs as unfortunate, Chief Minister Uddhav Thackeray on Wednesday said the legal battle for the reservations to that community will continue till there is “victory”.

In a statement after the apex court verdict, Thackeray said, “With folded hands, we request the prime minister and the president to take an immediate decision on Maratha quota.”

The chief minister said he expects the Centre to show the same alacrity on the Maratha quota issue as it did in delivering verdicts on issues like the Shah Bano case and repeal of Article 370 for which the Constitution was amended.

Thackeray said BJP MP Chhatrapati Sambhajiraje has been seeking Prime Minister Narendra Modi’s appointment over the Maratha quota issue for the last one year but to no avail.

The apex court has scrapped a decision taken by all parties in the state legislature, he said.

The legal battle for Maratha quota will continue till there is “victory”, Thackeray said.

Earlier in the day, the SC termed the state law on Maratha quota as “unconstitutional” and held there were no exceptional circumstances to breach the 50 per cent reservation cap set by the 1992 Mandal verdict.

The judgement came on a batch of pleas challenging the Bombay High Court verdict which had upheld the grant of reservation to Marathas in admissions and government jobs in the state.

The Maharashtra State Reservation (of seats for admission in educational institutions in the State and for appointments in the public services and posts under the State) for Socially and Educationally Backward Classes (SEBC) Act 2018 was enacted to grant reservation to people of the Maratha community in the state in jobs and admissions.

The Bombay High Court, while upholding the law in June 2019, had held that 16 per cent reservation was not justifiable and the quota should not exceed 12 per cent in employment and 13 per cent in admissions.

Meanwhile, the BJP on Wednesday blamed the Shiv Sena-led Maharashtra government for “failing” to convince the Supreme Court over the issue of reservation for the Maratha community in jobs and education.

State BJP president Chandrakant Patil demanded that the state government call an all-party meeting and a special session of the Assembly to discuss the issue.

The Supreme Court on Wednesday struck down the Maharashtra law granting quota to Marathas in admissions and government jobs, terming it as “unconstitutional”, and held there were no exceptional circumstances to breach the 50 per cent reservation cap set by the 1992 Mandal verdict.

“It is a complete failure of the state government. It failed to convince the SC on why it was important to breach the 50 per cent ceiling on quota in extraordinary circumstances, which has been created in the state with regard to the Maratha community,” Patil told reporters in Pune.

He said the previous Devendra Fadnavis-led state government had formed the Backward Class Commission which recommended to consider the Maratha community as backward on three fronts – social, economic, and educational.

The Fadnavis government then enacted the law (in 2018) giving reservation to the Maratha community in jobs and education, which was later challenged in the Bombay High Court.

“The Fadnavis government had successfully convinced the HC that Marathas account for 32 per cent of the state’s population and how it was an extraordinary situation in the state,” he said.

“Youth from the Maratha community should speak up on the issue and mount pressure on the state government,” the BJP leader said.

He demanded that the state government call an all-party meeting over the issue.

“In fact, they should call a special Assembly session on the issue of Maratha quota and the COVID-19 situation in the state,” he said.

Leader of Opposition in the state Legislative Council Pravin Darekar said the decision has come as a “complete disappointment” for the Maratha community.

“The law, cleared by both Houses of the state Legislature and upheld by the Bombay High Court, was struck down only because of this state government,” he said.

Vinod Patil, one of the petitioners seeking reservation for Marathas, termed the decision as “unfortunate”.

“We will decide our next move after going through the order in detail,” he said.

After the SC’s order, members of some Maratha organisations staged a protest by wearing black ribbons on their arms in Pune.

“It was necessary on part of the Maharashtra government to explain the state’s stand in the court, but it did not happen,” one of the protesters said.

Another protester termed it as a “black day” for the Marathas, saying youth from the community were hopeful of a decision in their favour.

The apex court struck down the law by terming it “unconstitutional”, and held there were no exceptional circumstances to breach the 50 per cent reservation cap set by the 1992 Mandal verdict.

“The Union government’s 102nd amendment had taken away decisions (read powers) of awarding reservation to the Maratha community because of which the erstwhile Fadnavis government framed the SEBC Act which has been quashed by the Supreme Court,” Chavan, who heads the state sub-committee on Maratha reservation, told a press conference.

“Passing a law when you had no such right amounts to misleading the Maharashtra Legislative Assembly and the council by Fadnavis as the then CM.

This amounts to cheating the people by giving them false information,” he alleged.

The 2018 SEBC (Socially and Educationally Backward Communities) Act of Maharashtra was enacted to grant reservation to people of the Maratha community in the state in jobs and admissions.

The Bombay High Court, while upholding the law in June 2019, had held that 16 per cent reservation was not justifiable and the quota should not exceed 12 per cent in employment and 13 per cent in admissions.

Chavan said the SC has “stamped on the fact that Maharashtra state has no right to award any such reservation after the 102 amendment in the Constitution.”

“When the 102nd amendment was passed in Parliament, the Centre had assured that rights of states will remain untouched and that there will be no impact on the acts passed by states.

However, the supreme court has refused this argument and set aside the Maharashtra government’s act of awarding reservation to the Maratha community,” the senior Congress leader said.

The top court had on March 8, framed six questions for adjudication while terming the issue of interpretation of the 102nd constitutional amendment as of seminal importance.

Meanwhile, another minister in the Maha Vikas Aghadi (MVA) government and NCP chief spokesperson Nawab Malik said, “The ball of Maratha reservation is now in the Centre’s court.

The state government is ready to submit a recommendation of awarding reservation to the Maratha community.

“Either the Union government reinstate the state’s rights to grant reservations through the court as assured on the floor of Parliament or it should set up a backward (classes) commission. The state government will submit its recommendations seeking reservation for the Maratha community to the commission,” he added.