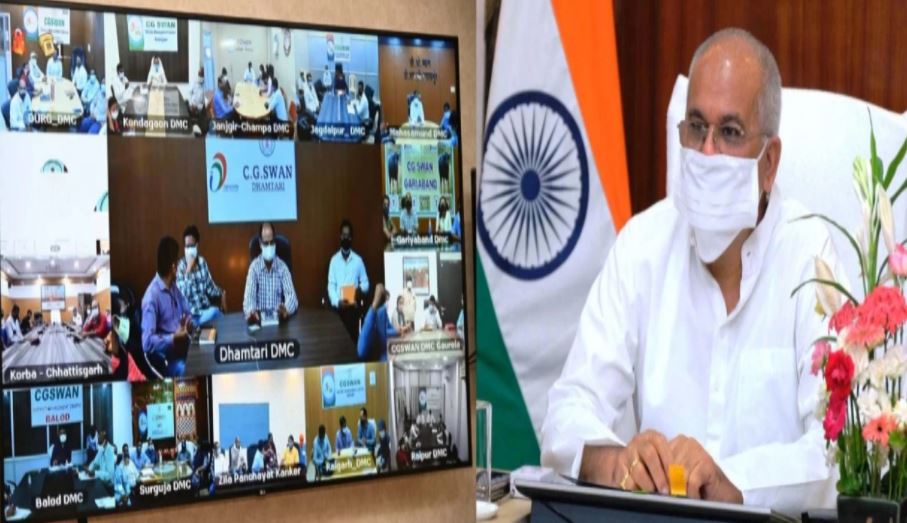 In a virtual meeting held at his residence office here today, Bhupesh Baghel discussed the officers and employees of the field staff of power companies of different districts and inquired about the work being done and their problems. The Chief Minister expressed happiness over the information received by the officers and employees of the field staff of the Electricity Department during the Kovid transition period to ensure smooth and smooth operation of power supply along with power generation. The Chief Minister said that in this difficult period, all officers and employees should strictly follow the Kovid protocol and work for the safety of themselves and their families. Use the mask, sanitizer continuously. He said that in this phase of Kovid transition, the field staff of the Electricity Department is doing uninterrupted power generation, continuous power supply and maintenance. He deserves congratulations for this. Chief Secretary Amitabh Jain, Additional Chief Secretary to Chief Minister Subrata Sahu, Secretary Siddharth Komal Singh Pardeshi, Special Secretary, Department of Energy and Chairman of Power Companies Ankit Anand were also present in the meeting. The Chief Minister said in the meeting that due to the lockdown, people are in homes and it is the summer season, so uninterrupted supply of electricity should be ensured to all the consumers, especially by prompt action on the pending cases of energization of the irrigation pumps of the farmers. Connection should be given. The Chief Minister said that connections of 32 thousand irrigation pumps of farmers have to be given, good work has been done in this direction in many districts. The tendering process has been completed in almost all the places. In case of normalization after lockdown, fast irrigation pumps should be provided with electric connections. During the meeting, the Assistant Engineers and Assistant Linemen of the electricity department associated with various districts told that they are being resolved quickly when there is a problem in the power supply. The work of meter reading is also being done. During the meeting, officers and employees urged the Chief Minister to get Kovid vaccination for people above 18 years of age. In this regard, the Chief Minister said that Chhattisgarh had first requested the Prime Minister to get vaccinations of people in the age group of 18 to 44 years. The state government is committed to provide free vaccination of persons in the age group of 18 to 44 years. Depending on the availability of the vaccine, rapid vaccination will be done. There is complete preparation for this. On May 1, only one and a half lakh doses of vaccine were received, whereas one crore 35 lakh people are to be vaccinated in this age group. He said that Chhattisgarh is on top in the country in terms of front line worker and Kovid vaccination for people above 45 years of age. As soon as the vaccine dose is available, people in the age group of 18 to 44 years will also be rapidly vaccinated. He said that vaccination has been arranged for health workers, front line workers, people in the age group of 45 to 60 years, people in the age group of 18 to 44 years. Chairman of power companies present in the meeting, Ankit Anand told that 90 percent of the total estimated expenses for treatment in hospital are being given as medical advance at standard rate for treatment to Kovid infected departmental officers and employees under Employee welfare . Contract workers are also being given a medical advance of up to Rs 50 thousand. The virtual meeting was attended by officers and employees of the power department of Durg, Raipur, Kondagaon, Janjgir-Champa, Bastar, Mahasamund, Gariaband, Gorela-Pendra-Marwahi, Raigad, Kanker, Balod and Korba districts. In the meeting, officials and employees informed that the departmental staff is doing quick reforms in case of power supply disruptions. The COVID protocol is strictly followed during the work. Officers and employees also informed that at present the work of maintenance is being done in case of an emergency. The Chief Minister took information about the operation of the plant there from the officials of the Generation Company in Korba. Officials said that power generation is being done smoothly following the Kovid protocol. The Chief Minister said that the work of electricity generation is important if anyone has a cold, fever, so keep them aside, so that infection can be avoided. Get such a person treated. Ensure that no outsiders enter the plant. Chief Minister Baghel also inquired about coal supply. Officials said enough coal was available. During the discussion with Bhupesh Baghel, Maheshwar Singh Sakar of Raipur district said that online complaints, complaints received on telephone and complaints received through the Peacock Electricity app are being resolved as soon as possible. In the Containment Zone also we are doing quick diagnosis using mask and sanitizer. Rajesh Pandey (Junior Engineer) from Risali said that there is no problem in working, there are 5 sub-stations in this area, which are being monitored 24 hours.