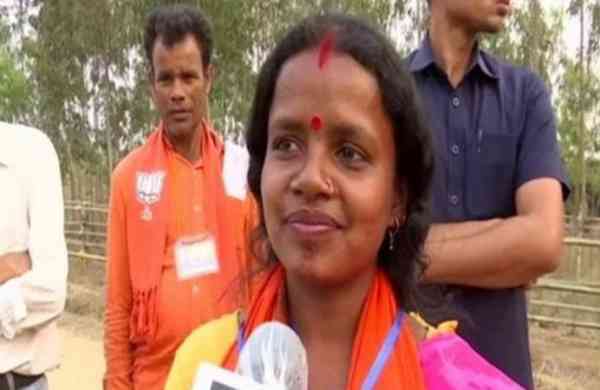 By Online Desk
BJP candidate Chandana Bauri scripted one of the historic wins in the West Bengal Assembly polls that will be long remembered by the people of the state.

Following Chandana’s win, many took to Twitter and hailed her for this astounding success, despite coming from a humble background.

According to the election affidavit filed by her, Chandana’s assets amount to just Rs 31,985, while her husband’s assets worth meager Rs 30,311. Chandana’s husband works as a mason for daily wages. Chandana, a mother of three children, along with her husband also owns three cows and three goats.

During an interaction with ANI in March, earlier this year, she said, “Before the tickets were announced I had no idea that I would be selected as a candidate in the legislative assembly polls. Many people encouraged me to apply for a nomination online, but I did not think I would be able to achieve this feat.”

Many hailed Chandana’s win as splendid and inspiring. Check out some of the reactions of people on Twitter.

#Chandana Bauri Is Leading and will Declared Winner within Hours She Is Daily wager @doctorrichabjp Ji https://t.co/3auYYqYb3x
— Shubham Thorat (@Shubham36551970) May 2, 2021

Chandana Bouri from Saltora constituency has won by 4145 votes!Remember-her total worth is ₹31,985 with three goats, three cows and one hut. pic.twitter.com/1pTVxauY7D
— Bengali Babu (@hatecommie) May 2, 2021

Show her.. victory of this common woman.. chandana bauri Saltora seat.. a woman with no political background, Money powerThis is the reason to smile.. pic.twitter.com/1NR6bp519r
— Sanjay Shrivastava #जय श्री राम (@casanjay_shri) May 2, 2021