No shortage of oxygen in India, use it judiciously: Centre 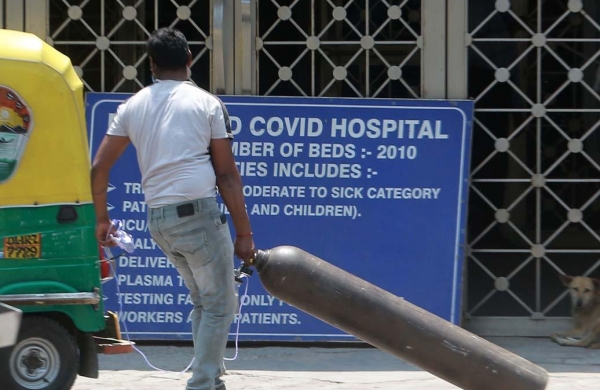 By PTI
NEW DELHI: The Centre on Monday said medical oxygen being given to COVID-19 patients, especially in hospitals, should be used “judiciously” and claimed that there was “shortage” of the life-giving gas in the country.

At a routine briefing on steps taken by the government to battle the COVID-19 crisis, Additional Secretary, Ministry of Home Affairs (MHA) Piyush Goyal told reporters that multiple efforts were being undertaken to enhance production and quickly transport oxygen to the hospitals and patients.

“It is very important for all the hospitals that they ensure judicious use of oxygen as per the guidelines issued in this context by the Union Health Ministry.

Many efforts are being undertaken in this context and we are getting positive results also.”

“We need to continuously monitor this so that very judicious use of oxygen is undertaken,” Goyal said.

He appealed to the citizens to not get “jittery about the lack of oxygen in the country.”

“Oxygen is available in adequate quantity in the country and efforts are being made to transport it to hospitals in the shortest possible time.”

“If we undertake this battle together, I have no doubt that we will be victorious,” the officer said.

The country is grappling with a raging second wave of the pandemic with lakhs of patients and their family members anxiously scouring for oxygen beds in hospitals, cylinders, medicines and other medical facilities.

Goyal also sought the support of citizens in ensuring that no “hoarding or black marketing” of oxygen cylinders takes place so that these are made available to patients who are gasping for breath due to the coronavirus infection.

The officer said the production of medical oxygen has increased in the country as he cited data to say that while on August 1 last year, the total production was 5,700 metric tonnes, it is 9,000 metric tonnes now.

“This is 125 per cent of daily production capacity (of medical oxygen),” he said.

He reiterated that despite increase in the demand of medical oxygen for patients due to rapid surge in COVID-19 infection, the country had “adequate” oxygen and the government was also importing it from abroad for future needs.

The officer said both traditional and non-traditional avenues are being explored and enhanced for production of liquid oxygen.

He said a group of senior officials from the Centre, various states, Union Territories, manufacturers and other stakeholders were making a daily assessment of the oxygen demand in the country and oxygen is being allocated to states as part of a “dynamic process” being undertaken everyday.

Goyal said the oxygen demand of no state was being “ignored” and the Centre has deployed Indian Air Force (IAF) heavy-lift aircrafts to transport empty oxygen tankers and the railways to ferry filled oxygen tanks from the place of production to their destinations.

He said major medical oxygen production facilities are based in the eastern part of the country while the maximum demand at present is in the central and northern region.

The additional secretary said as the demand for cryogenic oxygen tankers and containers is increasing, directions have been given to covert Nitrogen and Argon tankers for oxygen-carrying vessels.

Fifty per cent target has been achieved and more is being done in this direction, he said.

“We are also importing such tankers by either purchasing or hiring them,” he said.

The officer said the Ministry of Road Transport and Highways has developed a system through which trucks carrying oxygen cylinders which are plying on the road can be tracked on a real-time basis.

“These tankers are now GPS-tagged and there is colour-coding system that also tells you whether they are moving, stationary, taking an unauthorised stop or getting diverted from the stipulated route,” he said.

Goyal said multiple “virtual groups’ of officers from the Centre and state are monitoring every aspect of oxygen production, transport and distribution in the country and a “virtual control room” is also working round-the-clock to resolve issues immediately.