UP panchayat elections, UP Panchayat polls 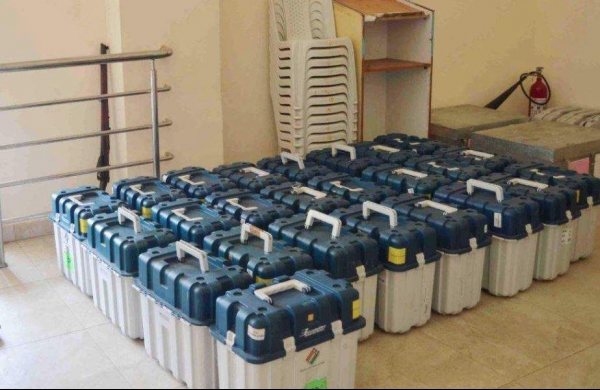 By PTI
LUCKNOW: Counting of votes for the panchayat polls in Uttar Pradesh will be held on Sunday with the Supreme Court on Saturday refusing to stay the process and the State Election Commission (SEC) saying the candidates and their agents will be allowed to enter the counting centres only if they have tested negative for COVID-19 in the 48 hours prior to the commencement of the counting process or taken both doses of the vaccine.

In a special urgent hearing on a holiday, a bench of justices AM Khanwilkar and Hrishikesh Roy passed the order after taking note of several notifications and assurances of the SEC that the COVID-19 protocols will be followed at all the 829 counting centres.

The court directed that there will be a strict curfew in the entire state till Tuesday morning and no victory rallies will be permitted.

It also asked the SEC to fix the responsibility for observance of COVID-19 protocols at the counting centres on gazetted officers.

The bench directed the poll panel to preserve the CCTV footage of the counting centres till the Allahabad High Court concludes its hearings on the related petitions before it.

It also ordered that the government officials, candidates and their agents will have to produce RT-PCR test reports to show that they are COVID-19 negative before entering the counting centres.

The top court’s direction came on a plea seeking a direction for observance of COVID-19 protocols during counting of votes.

The Uttar Pradesh Prathmik Shikshak Sangh (UPPSS), in a letter dated April 29 and addressed to the chief minister and the state election commissioner, had said if the counting of votes on May 2 was not cancelled, the teachers will boycott poll duty.

Meanwhile, UPMSS (Uttar Pradesh Madhyamik Shikshak Sangh) spokesperson RP Mishra said the election officials have been informed that the circumstances in which the polling was held and non-compliance of COVID norms led to the infection spreading to a large number of poll staff and also deaths.

In this horrific situation, going ahead with the counting of votes is not appropriate.

It also said the kin of the teachers who succumbed to COVID-19 during poll duty be given a compensation of Rs 50 lakh each.

A spokesperson of the Rashtriya Shaikshik Mahasangh Virendra Mishra told PTI that the organisation has given a call to boycott the counting of votes.

When he was informed that the Supreme Court has refused to grant a stay on the counting of votes on May 2, he said the court is doing its job, but “we have to protect our own lives”.

“We are not commenting on the court, but seeing the rigid approach of the government, the teachers will not go for the counting of votes,” he said.

On April 27, taking note of reports about the death of government employees due to COVID during panchayat poll duty, the Allahabad High Court had asked the SEC why action may not be taken against it and its officials for the same.

A two-judge bench of Justice Siddhartha Varma and Justice Ajit Kumar passed the order on a suo motu public interest litigation matter on the spread of the coronavirus and the condition of the state’s quarantine centres.

When contacted, BJP MLC Hari Singh Dhillon, who had urged the chief minister to postpone the poll results until the COVID situation improves, said some teachers came to him highlighting their plight.

Asked to comment on the teachers’ call to boycott the counting of votes, SK Singh, Officer on Special Duty at the SEC, said, “The respective district magistrates will have to take a decision.”

On whether the boycott call would delay the counting process, he evaded a direct reply and said all preparations have been made to ensure a smooth counting.

Singh said the SEC does not have a centralised database of the number of teachers involved in the counting process.

“The counting of votes will begin at 8 am and continue till all the ballots are counted. The entire process may take two days,” a senior SEC official told PTI.

The SEC said at every counting centre, a health desk will be established, where a doctor will be present with medicines.

Those showing symptoms of COVID-19 such as fever, cold and cough will not be allowed at the counting centres.

Everyone entering the counting centre has to undergo thermal scanning, the SEC said.

It categorically stated that there will be a complete ban on victory processions.

Directions have been issued to make arrangements for sanitiser, soap and water at the counting centres, and everyone visiting the centres will have to compulsorily wear a mask and maintain social distancing.

Voting for the panchayat polls in Uttar Pradesh ended on April 29 with a 75-per cent voter turnout in the final phase.

A total of 3.19 lakh candidates have been elected unopposed, the SEC informed.

The high court had asked the state government to conclude the panchayat poll process by May 25.