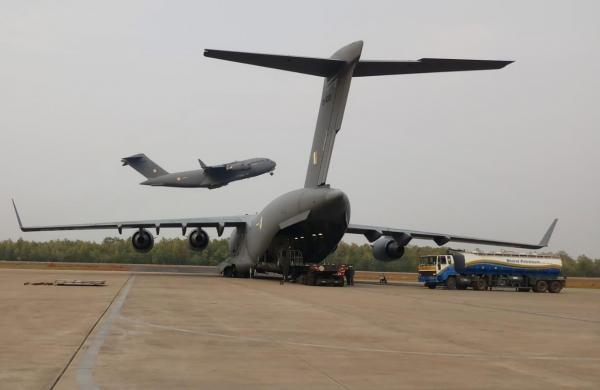 Express News Service
NEW DELHI: The Indian Air Force (IAF) has ordered round-the-clock readiness of the entire heavy-lift fleet and substantial numbers of medium-lift fleets to operate in a hub and spoke model.

In support of the national effort to combat COVID-19 second wave, the IAF fleet is operating from a hub with sorties within India and abroad

While the force has augmented Aircrew for all fleets to ensure round-the-clock operations, IAF has taken stringent measures to preserve its combat potential in the face of COVID 19.

Special care has also been taken to prevent an outbreak amongst the operational crew and all personnel involved in COVID tasks, including segregation and stringent precautions.

“98% of all air warriors have been vaccinated with the first dose and 85 % percent with the second dose. Sustained efforts to ensure 100% vaccination at the earliest are ongoing,” informed IAF.

While the force, with its measures, has restricted active cases to 1% of the IAF population, strong measures to enhance capacities in hospitals and medicare centres have also been taken. With proper planning and precaution, the efforts of the air force personnel have succeeded in executing major mobilisation.

As per the force, “As of 30 Apr 21, IAF has used their heavy-lift assets to airlift 39 cryogenic oxygen containers from Singapore, Thailand, and Dubai, and has already rapidly positioned 126 oxygen tankers at key locations within the country.”

Mobilising the C-17s, two cryogenic oxygen containers were airlifted from Chandigarh to Bhubaneswar, one from Baroda to Ranchi, two from Gwalior to Raipur, two from Mumbai to Bhubaneswar.

In addition, IAF IL-76 has also airlifted three oxygen plant equipment from Delhi to Dimapur and an Army load of 11.5T with 90 medicos from Dimapur to Bakshi ka Talab for setting up of Covid Hospital at Lucknow.

These efforts are ongoing and all requirements being projected are being met on a war footing, said the Air Force.