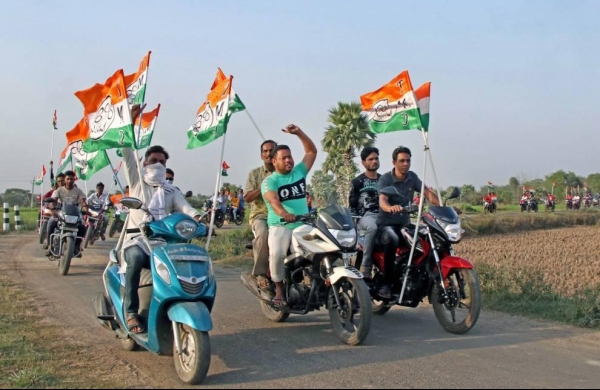 By PTI
KOLKATA: A political game will be successful only if there is no loss of life and people smile in the end, believes Bangladesh’s ruling Awami League MP Shamim Osman, considered the creator of the ‘Khela hobe (game will happen ) slogan, used amply by the Trinamool Congress during the ongoing assembly elections in West Bengal.

The two-word slogan ‘Khela Hobe’ of the TMC has become so popular during the high-octane campaigning that even the BJP, which is trying to dethrone the Mamata Banerjee government, has used it in its own way.

Talking to PTI from Dhaka in an exclusive interview, the MP of Narayanganj-4, said that he started using the slogan in 2016 in an entirely different context, when they were fighting “anti-independence forces” in Bangladesh, but will be happy if the people on the other side of the border win the ‘khela’ and there is no bloodshed.

“I have heard that politicians in Bengal have been using the Khela hobe slogan. But I do not know in what context they are using it. It will be the asol khela (real game) if the people of Bengal win it,” the sexagenarian politician said.

Asked in what context he had coined the ‘Khela hobe’ slogan in 2016, Osman said that it was used against the anti- liberation forces of Bangladesh.

The senior Awami League leader alleged that the Bangladesh Jamaat-e-Islami and the Bangladesh Nationalist Party (BNP) were against the nation’s freedom but they got a chance to be in full-fledged politics.

“The Jamaat along with the BNP had carried out destructions in Bangladesh for at least three months during 2013-14. People will not forget that. It was at that point of time we coined the khela hobe slogan (at a public rally).”

This year, The TMC’s Birbhum district president Anubrata Mondal first started using the slogan and later the party’s theme song was written with the two words coming as a refrain.

After that, every TMC leader including Chief Minister and party supremo Mamata Banerjee was heard uttering ‘Khela hobe’ in their public meetings.

“In India, people who are into politics were never against the independence of the country and they all wanted the country to stay together. But in Bangladesh, this was not the case. That’s the beauty of Indian politics,” he said.

“I was very close to Pranab Mukherjee and Jyoti Basu. Pranab-babu was like a father figure to me. And I have seen how cordial these politicians were towards each other despite their ideological differences,” the Awami League MP said.

He expressed hope that India will achieve the status of a superpower.

“We, who are in the Sheikh Hasina government, want the Indian democracy to flourish more. The more India will be powerful, Bangladesh will progress. India is trying to be a superpower whereas we are developing,” he signed off.