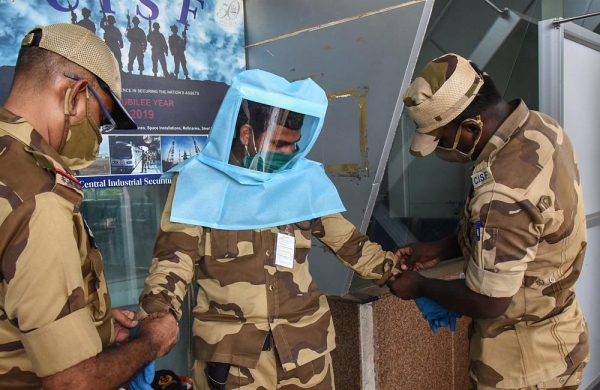 By PTI
NEW DELHI: More than 580 personnel of the central armed police forces (CAPFs) and two other central forces under the command of the Union home ministry have been detected positive for coronavirus infection in a 24-hour span, officials said on Wednesday.

The 24-hours data has been compiled till Tuesday.

The maximum cases have been registered in the Nepal and Bhutan border guarding force Sashastra Seema Bal (SSB) at 149 followed by 146 in the Central Industrial Security Force (CISF) that primarily guards major civil airports of the country and other critical infrastructure.

The data said that fresh cases registered over the last 24 hours, as on April 27, are 587.

The active cases in all these five CAPFs and two other central forces forces stand at 6,264 while over 55,730 personnel have recovered from the infection of the pandemic that is witnessing a massive second surge in the country leading to shortage of oxygen and hospital beds for the patients.

A total of 230 personnel of these forces, except NSG, have died due to the viral disease till now, the data said.

The CAPFs and the two other forces, with an estimated manpower of over 10 lakh personnel, are deployed for rendering a variety of internal security duties across the country, border guarding, VIP protection, combating disasters and undertaking counter-terrorist and counter-insurgency operations under the command of the Union home ministry.