Haryana to get its first Oxygen Express soon; Railways ferries 510 tonnes of O2 in 10 days 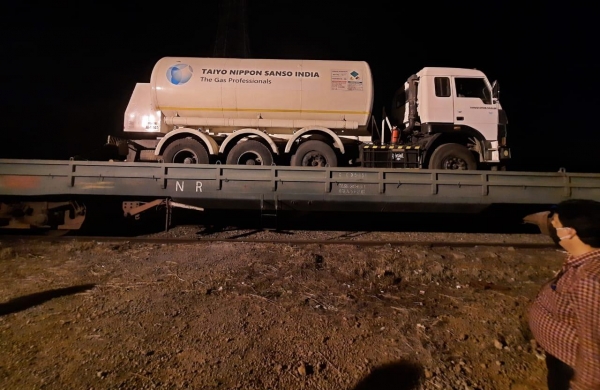 By PTI
NEW DELHI: Haryana will get its first Oxygen Express train over the next few days with five tankers leaving Faridabad on Wednesday to load the life-saving gas from Rourkela in Odisha, the railways said.

Since April 19, the railways’ Oxygen Express trains have delivered a cumulative 510 tonnes of oxygen to Uttar Pradesh, Maharashtra, Delhi and Madhya Pradesh, it said.

“The Haryana government has also requested railways for Oxygen Express. Currently, tankers are being loaded in Faridabad, which will be sent for filling to Rourkela. As of now, It is planned that two Oxygen Express trains with a capacity of five tankers each will be run specifically for Haryana,” the railways said.

The first Oxygen Express train was pushed into service on Aril 19 when seven trucks left Mumbai for Vizag to load oxygen.

These trucks were loaded on flat wagons and carried to the loading location.

Each tanker of the Oxygen Express trains can carry around 16 tonnes of medical oxygen and these trains travel at a speed of around 65 kmph.

These tankers were unloaded at various locations across the state like Jabalpur (one), Bhopal (two) and Sagar (three), it said.

“Another empty rake is on its way from Lucknow to Bokaro, which will bring another set of oxygen tankers replenishing oxygen supply to Uttar Pradesh. Continuous Oxygen Express to Uttar Pradesh is ensuring uninterrupted oxygen replenishment to the residents of UP,” the railways said.

So far, railways has delivered 202 tonnes of oxygen to Uttar Pradesh, 174 tonnes to Maharashtra, 70 tonnes to Delhi and 64 tonnes to Madhya Pradesh, it said.