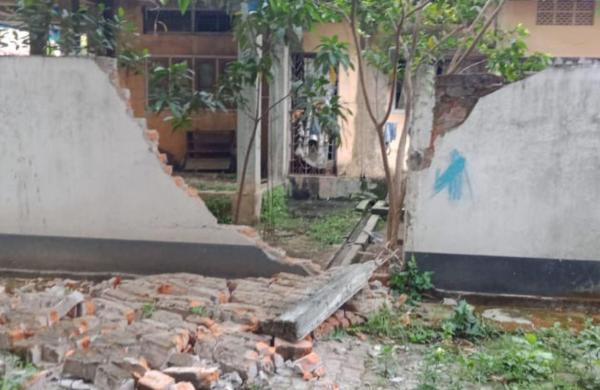 Express News Service
GUWAHATI: Two persons died due to shock while at least 10 others were injured in Wednesday’s 6.4 Magnitude earthquake in Assam which also left roads and buildings damaged.

Ten aftershocks of varying magnitudes from 2.9 to 4.7 on the Richter scale were felt between 7.51 am to 5.40 pm having its epicenter mostly in Sonitpur district on the north bank of the Brahmaputra.

The earthquake was felt across Northeast, Bihar, West Bengal, and Bangladesh.

“Two persons died due to shock/cardiac arrest. The deaths were reported from Chandrapur in Kamrup (Metro) and Nagaon districts. We received reports that at least 10 people were injured in different parts of the state,” Assam State Disaster Management Authority Chief Executive Officer, GD Tripathi said.

He said a number of high-rise buildings and hotels, mostly in Guwahati, were among structures that suffered damages. In some places, the earth got broken, he said.

Cracks developed at the newly-constructed Maha Mrityunjay temple in Nagaon district. With a height of 126 feet, it is the world’s tallest Shivalinga-shaped temple.

After the earthquake, a dry river at Gadhorjuli near Dhekiajuli got filled with water in no time, locals claimed. Sonitpur District Magistrate Manvendra Pratap Singh said, “Somebody told me about it but I don’t have the confirmation”.

Water was seen springing out of the ground at many agricultural fields elsewhere in Dhekiajuli. A video of it was shared by Assam’s Finance Minister Himanta Biswa Sarma on Twitter.

Water seeping out from a paddy field in Narayanpur area of Dhekiajuli, the epicenter of the massive 6.7 earthquake in Assam pic.twitter.com/BOD6bfCp6s
— Himanta Biswa Sarma (@himantabiswa) April 28, 2021

People screamed as they scurried out of their homes to safety. Some inmates of apartments in Guwahati decided against returning to their accommodations as the structures developed cracks.

“We have extensively surveyed the earthquake damage and found that these are primarily non-structural damage. We, therefore, request all to act responsibly and discourage the offensive practice of spreading panic,” AREIDA president PK Sharma said.

“PM @narendramodi ji is taking regular updates about the situation after the earthquake at Dhekiajuli this morning. Got a 2nd call from the Hon’ble PM within a span of few hours. I have apprised him about the latest situation,” Sonowal tweeted.

The National Centre of Seismology (NCS) said preliminary analysis showed the event was located near the Kopili Fault closer to the Himalayan Frontal Thrust.

“The area is seismically very active falling in the highest Seismic Hazard Zone V associated with collisional tectonics where Indian Plate subducts beneath the Eurasian Plate. The historical and instrumentally-recorded earthquake data reveals that the region is affected by moderate to large earthquakes and the most prominent event among those is the July 29, 1960, Assam earthquake of 6 Magnitude,” the NCS said in a statement.