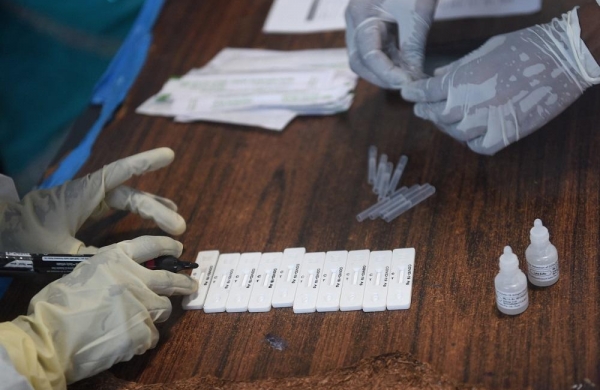 By PTI
JAIPUR: Rajasthan recorded the highest single-day rise in its COVID-19 death toll with 121 more people succumbing to the viral disease on Tuesday as well as 16,089 fresh cases.

With the fresh cases, the state’s cumulative tally has climbed to 5,46,964 and the death toll stands at 3,806, according to an official report.

“After showing the initial symptoms, my COVID test report is positive today. On the advice of doctors, I have isolated myself at the Sikar residence. I request all the people who have come in contact with me for the last few days to get the test done,” Dotasra tweeted.

Dotasra has tested positive for the second time.

Meanwhile, BJP MLAs in Rajasthan will donate a month’s salary to the Chief Minister’s Relief Fund as a contribution to the fight against the second wave of the coronavirus in the state.

“After discussion with the leaders of the party, it was decided that BJP MLAs will give one-month salary to CM Relief Fund as a contribution at the time of the coronavirus crisis,” Leader of opposition Gulabchand Kataria said on Tuesday.

He said the amount will be given as soon as possible in accordance with the decision of the party.

The BJP has 71 MLAs in the state Assembly.

A new oxygen plant has been set up in Rajasthan’s Alwar district to deal with a nearly five-fold increase in demand for the life-saving gas amid a surge in COVID-19 cases in the state, officials said on Tuesday.

The requirement of oxygen cylinders has reached 31,425 a day from 6,500 three months ago, they said, adding oxygen tankers were airlifted from Jamnagar in Gujarat to deal with the emergency.

Health Secretary Siddharth Mahajan said a Hindustan Zinc Limited plant with a capacity to fill 1,200 cylinders a day will become operational in Dariba of Rajsamand district by next week.

The new plant in Alwar has the capacity to generate oxygen for 1,000 cylinders in a day.

“All possible measures are being taken and arrangements are being made by the state government (to deal with the situation) on war footing,” he said.

He said that GPS has been installed in oxygen tankers to ensure timely supply and for monitoring their movement.

The officer said that the supply of oxygen is restricted to health centres and cylinders used in industrial works have been acquired and made available for medical purpose.

“State officials have been deployed to supervise oxygen generation plants,” he added.

Rajasthan witnessed record numbers of daily infections and deaths in the past few days as the country faces a second wave of the coronavirus pandemic.