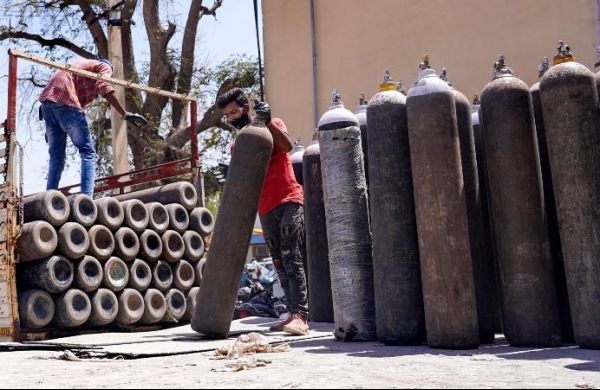 By PTI
JIND: A man hailing from Sangrur in Punjab on Tuesday alleged that Haryana police personnel stopped him and held up his vehicle in which he was carrying two oxygen cylinders for his kin, a COVID patient admitted in a hospital in Ghaziabad.

Rajendra Singh, the affected person, told reporters here that he was headed to Ghaziabad in Uttar Pradesh from Dhuri village in Punjab’s Sangrur when his car was stopped by the police at a checkpoint in Jind district around 11 pm on Monday.

“I told them that I have to reach a hospital in Ghaziabad, where my relative was admitted due to COVID-19 and had a requirement for oxygen which I had arranged. The police personnel asked me to show vehicle papers, which I did. I even made a video call to show that the patient was actually admitted and in bad shape,” Singh claimed.

He, however, said his phone was seized by the police at the checkpost in Gatauli area of Jind district and given back only in the morning while his vehicle was also held up during this period.

He said that his 60-year-old relative Lalit Mohan, who was admitted in the Ghaziabad hospital, later passed away.

Singh blamed the Haryana police personnel for his death.

He also lodged a written complaint in this regard with senior police officials.

Meanwhile, Jind Deputy Superintendent of Police Pushpa Khatri told reporters on Tuesday that they received a complaint from the Sangrur resident in which it has been alleged that police stopped the private vehicle during checking which was going from Sangrur to Ghaziabad carrying two oxygen cylinders.

“The complainant has alleged that police held up his vehicle during checking due to which there was alleged delay in supplying oxygen cylinders to the patient leading to his death. In this regard, Jind DIG (O P Narwal) has ordered a probe,” she said.

“Further investigations are in progress and further action will be taken as per the facts which emerge,” she said.

Also, Virendra, the in-charge of the police outpost, described the allegations by the Punjab resident as baseless.

He said, “The car with a Punjab number plate was stopped at night, in which two oxygen cylinders were found.”

“The driver could not show the required papers on the spot. He was later released at night upon showing the necessary papers,” the policeman said.

Jind DSP Khatri pointed out that daily night curfew is in place and there are government instructions in place to check if there is any black marketing of oxygen cylinders or hoarding due to which checking of vehicles is routinely done.