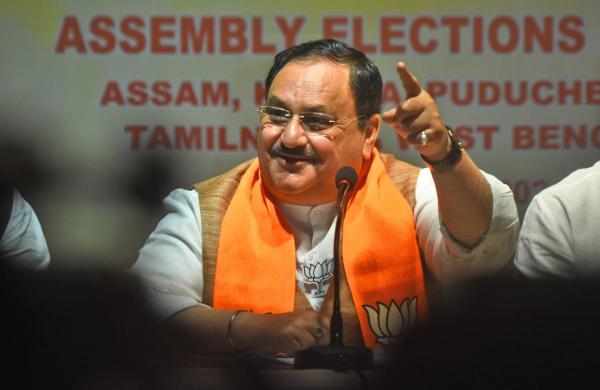 By Express News Service
KOLKATA: BJP national president J P Nadda on Monday claimed that his party had crossed the magic figure of 148 seats after the sixth phase of the West Bengal Assembly elections held on April 22. He also expressed gratitude to the electorates for supporting the BJP.

“The BJP is all set to come to power in West Bengal. We have already crossed 148 seats out of 294 required to form the government in the state. In the last two phases, the BJP will touch its target of bagging 200 constituencies,” said Nadda at a press conference in Kolkata as he concluded his party’s high-octane campaign for the West Bengal elections.

Nadda also said the elections in the state remained peaceful this time as his party workers did not fall into the trap of the ruling Trinamool Congress.“TMC workers had been instigating our party workers since the first phase. But it was our foot-soldiers who did not step into their trap. The people voted for the BJP in large numbers and rejected the misrule of the Mamata Banerjee government,” he added.

He reiterated that the BJP would keep its promise of building a “Sonar Bangla” and the process will start after May 2, the counting day. Nadda accused Banerjee of misleading people of West Bengal on various issues, ranging from “insider-outsider” to Covid vaccination during the campaigning. He also asserted his party had upheld the culture and legacy of Bengal as against the “insulting” language adopted by Banerjee against the BJP leadership.