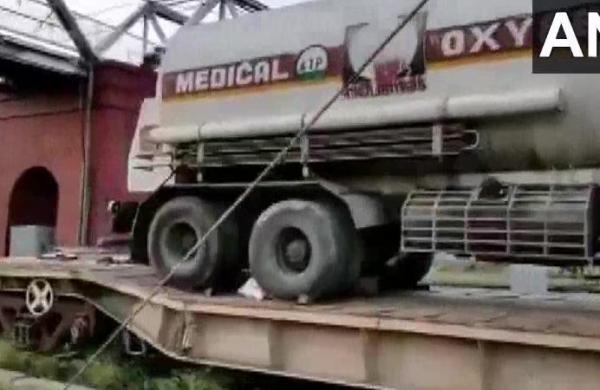 The train, carrying about 44 tonnes of liquid medical oxygen, nearly 15 tonnes in each tanker, reached Kalamboli in Navi Mumbai at around 11.30 am, covering a distance of about 860 km in over 17 hours, they said.

This is the second ‘Oxygen Express’ to arrive in Maharashtra, which is facing shortage of the liquid medical oxygen due to a sharp surge in COVID-19 cases.

The first ‘Oxygen Express’ carrying seven tankers of the liquid medical oxygen reached the state from Visakhapatnam on April 23.

Four of those tankers were offloaded at Nashik and three at Nagpur, considering the local need.

Informing about the ‘Oxygen Express’ which arrived on Monday, Western Railway officials said the Ro-Ro (Roll on-Roll off) goods train carrying three tankers of the liquid medical oxygen on BWT wagons left from Hapa at Jamnagar in Gujarat around 6 pm on Sunday.

After an overnight journey via Viramgam, Ahmedabad, Vadodara and Surat, the train entered Maharashtra in the morning, they said.

The three oxygen tankers are supplied by the Reliance Industries in Jamnagar, he said.

“Necessary arrangements were made at the Hapa goods shed in a short time for the smooth movement of the train,” he said.

According to the Western Railway, authorities followed all safety parameters, keeping in mind the height of the gas tankers and monitored their pressure from time to time.

“As liquid oxygen is cryogenic, there are many limitations, like the speed at which it can be carried, acceleration and deceleration and loading restrictions,” Thakur said.

On April 18, the Railways had announced it will run ‘Oxygen Express’ trains over the next few days to transport liquid medical oxygen and oxygen cylinders across the country.