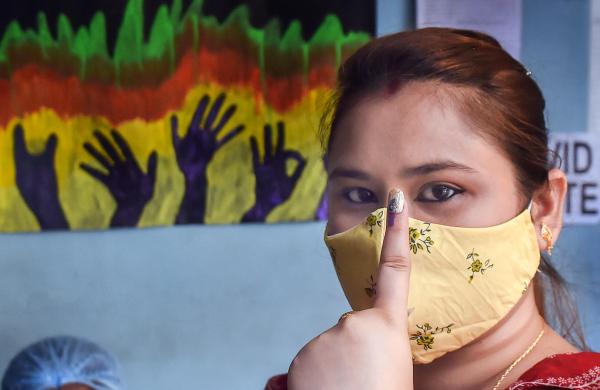 By PTI
KOLKATA: Stray incidents of violence were reported Monday from some areas where voting is underway for the seventh phase of the assembly elections in West Bengal, though the overall polling process has been peaceful with 55.12 per cent turnout till 1 pm, officials said.

Long queues were seen outside most polling booths where voting is underway, adhering to Covid protocols, they said.

Voting is being held at 12,068 polling stations spread over nine assembly constituencies each in Murshidabad and Paschim Bardhaman districts, six each in Dakshin Dinajpur and Malda and four in Kolkata, including Chief Minister Mamata Banerjee’s home turf Bhabanipur.

A few incidents of scuffle were reported from the Asansol area, where TMC candidate Sayoni Ghosh claimed that BJP activists tried to jam booths in her constituency.

The allegation was dubbed as baseless by BJP candidate Agnimitra Paul, who asserted, “Ghosh is making excuses sensing defeat”.

Mohan Rao was detained after several women voters claimed he tried to drag them holding their hands inside Bidya Bharati School, a police officer said.

Rao, however, rubbished the allegations and said no such incident had taken place.

“We have received a complaint in this regard and a probe is underway,” the officer said.

In the Jamuria constituency, Left Front candidate Aishe Ghosh alleged that her party agents were stopped from entering the booth by TMC workers, a charge denied by the ruling party.

Voting will continue till 6.30 pm.