About 81 COVID patients treated on board rail isolation coaches in second spell; eight discharged, no deaths 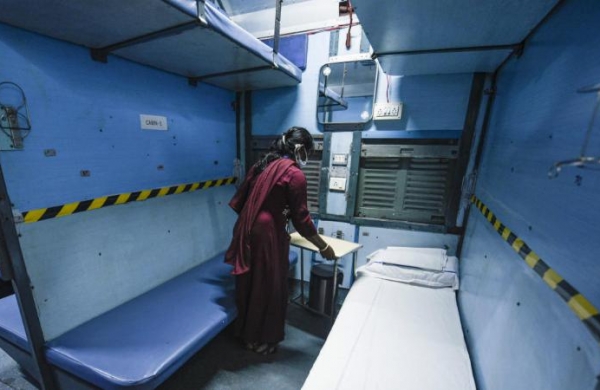 By PTI
NEW DELHI: Around 81 patients have been treated so far on board the railways’ COVID care coaches in nine stations in the second wave of the pandemic out of which eight patients have been discharged, the Ministry of Railways said on Monday.

The railways currently has 4,000 coaches, retrofitted as isolation units with a capacity of 64,000 beds, ready to be deployed across states, it said.

None of the facilities have registered any casualties, it said.

Currently, these coaches are positioned at nine major railway stations in the states of Delhi, Uttar Pradesh, Madhya Pradesh and Maharashtra.

In Delhi, the railways has catered to the full demand of state government for 75 COVID Care coaches with a capacity of 1,200 beds.

While 50 coaches are positioned at Shakurbasti, 25 more have been deployed at Anand Vihar station.

Presently, five patients are admitted at Shakurbasti, while one has been discharged.

In the first COVID wave last year, 857 patients were admitted and discharged at the facility.

In Bhopal in Madhya Pradesh, the railways has deployed 20 isolation coaches with a capacity of 292 beds.

In Nandrubar in Maharashtra, 24 isolation coaches with a capacity of 292 beds have been deployed.

This facility has 73 patients admitted in the current COVID spell, including four who were admitted on Monday.

Seven patients have been discharged so far from this facility.

The unit has 326 beds still available for patients.

In UP, coaches have not yet been requisitioned by the state government.

However, 10 coaches each are placed at Faizabad, Bhadohi, Varanasi, Bareli and Nazibabad railway stations totalling to a capacity of 800 beds (50 coaches).

These coaches, modified for coronavirus patients, have been divided into eight bays or ‘cabins’ with each having 16 beds.

Every coach has three toilets — one western and two Indian style — and a bathroom with hand showers, buckets, mugs and seating arrangement.

Mosquito nets, bio-toilets, power sockets and oxygen cylinders are available inside the coaches.

Also, space has been created to hold IV-fluid bottles.

Extra bottle holders and clamps have been provided to hang them.