Oxygen Express with 70 tonnes of oxygen to reach Delhi by Monday night: Railways 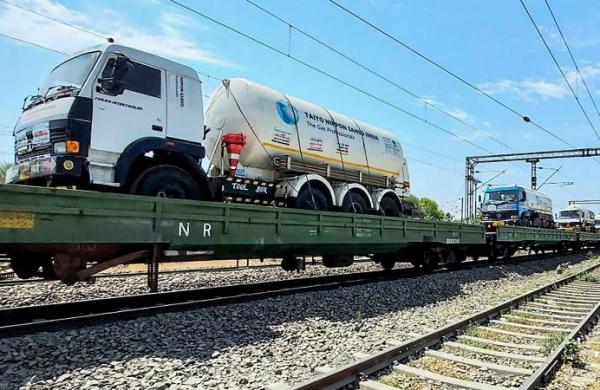 By PTI
NEW DELHI: The first Oxygen Express train for Delhi carrying around 70 tonnes of the life-saving gas will depart from Jindal Steel Works plant in Raigarh, Chhattisgarh on Sunday night, a senior official said.

The railways has chalked out plans to transport medical oxygen from Angul, Kalingnagar, Rourkela and Raigarh to Delhi and NCR region, Sharma said, adding the Delhi government has been advised to get road tankers ready to obtain the oxygen.

It will reach Delhi by Monday night,” the railway board chairman said.

Every few hours, as it has been for the last days, hospitals across the national capital and its suburbs have been sending out desperate messages seeking help on social media and other platforms, flagging their dwindling stocks of oxygen.

In view of the high demand for oxygen in the country following a record spike in coronavirus cases, the railways has decided to run Oxygen Express trains to transport liquid medical oxygen and oxygen cylinders across the country.

Tankers are being transported on flat wagons by trains for quick supply of medical oxygen.

“We have carried 150 tonnes of oxygen to Uttar Pradesh and Maharashtra till now and by tonight we will move 150 tonnes more.

About Delhi, we are readying four tankers from Jindal Steel Plant in Raigarh, Sharma said.

“Plans are ready to move oxygen for Delhi and NCR region from plants in Angul, Raigarh, Kalingnagar and Rourkela.

We have asked the state government to keep their trucks ready,” the official said, adding that wagons are ready for the movement of oxygen containers on container wagons from Durgapur to Delhi.

Officials said the Delhi government in its letter to the railways has asked it to load liquid medical oxygen from nine locations.

“These have been examined and the feasibility analysed after which the state government was informed that oxygen can be transported from seven out of these nine locations.

The other two sites were not feasible due to technical reasons, an official said.

“They were also requested to arrange tankers and place indent at stations.

The Assistant Divisional Railway Manager, Delhi is being nominated as nodal officer for the purpose,” the official said.

Delhi reported a staggering 348 deaths due to COVID-19 as hospitals in the national capital continued to grapple with a severe shortage of medical oxygen.

Sharma said encouraged by the response of the first two Oxygen Express trains, the railways has moved four tankers from Lucknow to Bokaro and they have been loaded.

They’re about to start from Bokaro.

We expect that by midnight, they’ll be able to reach Varanasi and by tomorrow morning they’ll reach Lucknow, he said.

So, these nine tankers will carry approximately 150 MTs of Oxygen, much needed for Uttar Pradesh.

Other than Delhi, we are also in touch with governments of Delhi, Madhya Pradesh, Telangana and Andhra Pradesh for Oxygen Express for their states, Sharma said.

Indian Railway has mapped out the following routes to transport oxygen:

* For the delivery of more liquid medical oxygen to Maharashtra, railways has planned to transport oxygen from Jamnagar to Mumbai and for Nagpur/Pune from Vizag/Angul.

* Railways has mapped the route from Angul to Secunderabad to deliver liquid medical oxygen for Telangana.

* For Andhra Pradesh, railways has planned to transport liquid medical oxygen from vacancy Angul to Vijayawada.

* For Madhya Pradesh, railways has mapped the route from Jamshedpur to Jabalpur for the transportation of liquid medical oxygen.