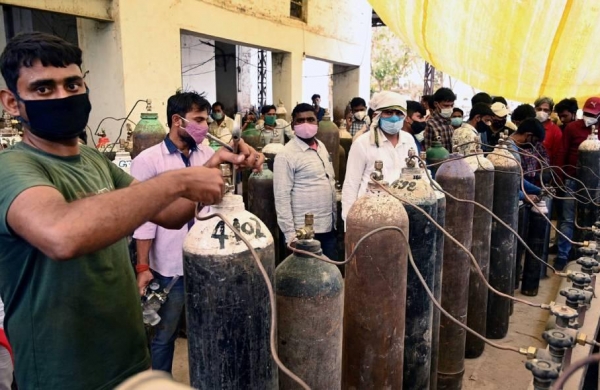 By PTI
LUCKNOW: The death toll from COVID-19 in Uttar Pradesh crossed the 10,000-mark on Tuesday with 162 more fatalities, while the infection tally exceeded nine lakh after detection of 29,754 fresh cases, according to a senior official.

The state had recorded 167 coronavirus-related deaths, its biggest single-day death count so far, on Monday and the largest one-day spike of 30,596 fresh cases on Sunday.

The recovery count rose to 6,75,702 in Uttar Pradesh on Tuesday with over 14,391 patients discharged in the past 24 hours, Additional Chief Secretary Amit Mohan Prasad told reporters.

The new fatalities and cases pushed the death toll in the state to 10,159 and the infection count to 9,09,405, the senior official said.

Of the fresh deaths, a maximum of 28 were reported from Kanpur, 19 from state capital Lucknow, 13 from Allahabad, eight from Gautam Buddh Nagar and seven from Varanasi, it said.

On the bright side, the number of recoveries is also increasing.

Of the total active cases, 1,76,760 are in home isolation, 4,455 are undergoing treatment at private hospitals and the rest are admitted to government hospitals, Prasad said.

He said over 3.86 crore samples have so far been tested for COVID-19 in the state, which included over two lakh tests on Monday.

About the ongoing COVID vaccination drive, he said a total of 1,09,34,566 doses were administered to people in the state.

The state on Tuesday imposed till further orders a weekend curfew in the entire state and a night curfew during weekdays in all districts having more than 500 cases.

While the night curfew in the districts with 500-plus cases will be effective from 8 pm to 7 am next day starting Tuesday, the weekend curfew will be enforced from Friday 8 pm to Monday 7 am, during which all non-essential activities will be restricted.

A top UP government official had earlier said the night curfew will be imposed “throughout” the state.

These decisions, aimed at breaking the transmission chain of the virus spread, were taken in a meeting chaired by Chief Minister Yogi Adityanath.

On the issue of migrants coming back to the state from Maharashtra, Rajasthan and Delhi, Chief Minister Adityanath said the bordering districts of UP must exercise special caution, and provisions should be made for smooth movement of the migrant workers.

He also asked the Home Department and the Transport Department to coordinate and act to provide adequate facilities for the testing and treatment of the migrant labourers.

The Mathura district administration has decided to increase 500 oxygen beds within a week in view of the recent surge in novel coronavirus cases, officials said on Tuesday.

He asserted that there is no dearth of hospital beds in the district and the administration is working on a plan to increase the number of oxygen beds.

He said 220 oxygen beds are available in private hospital Nayati and another 100 in Ram Krishna Hospital Vrindavan 100.

The administration has also issued an order and stationed officers at a Greater Noida oxygen manufacturing plant to check movement of oxygen cylinders, hindering supplies to hospitals in the national capital.

The officers, of the rank of deputy district officer, will “be present at the company site during the allotted hours and ensure adequate supply of oxygen to Covid-19 hospitals” in the Gautam Buddha Nagar district, the order by Suhas said.

One officer has been posted at the factory from 8 am to 8 pm and another for 12 hours beginning 8 in the evening, according to the order reviewed by PTI.

The factory supplies medical oxygen to hospitals in Delhi.

The order has hampered supplies to several hospitals in the national capital.

Also, the company is unable to supply oxygen from its Rajasthan plant due to restrictions imposed by the state government.

This is creating an acute shortage in the national capital, three persons aware of the development said.

Delhi Chief Minister Arvind Kejriwal on Tuesday urged the Centre to provide medical oxygen to Delhi, saying some hospitals are going to run out of supplies in a few hours.

Around 120 patients are currently in the ICU.

Sources said the hospital needs about 9,500 cubic metres per day of oxygen.

Against this, it is being supplied about 5,000 cubic metres a day.

It had oxygen to last just six hours.

The state  has also decided to administer COVID-19 vaccine free of cost to all those above 18 years of age from May 1.

The decision was taken at a Cabinet meeting chaired by Chief Minister Yogi Adityanath.

The Cabinet also thanked Prime Minister Narendra Modi for allowing administering of coronavirus vaccine to those above 18 years of age.

“The PM’s decision will help in better management of COVID and massive vaccination will help in defeating coronavirus. We have decided to vaccinate all above 18 years free of cost. The state government will take forward the vaccination programme with its own resources,” the CM said, according to a statement issued here.

During the deliberations, the chief minister asked the state Health Department to work out an action plan to conduct the vaccination campaign on a large scale.

“We have to increase vaccination centres and create a database of people in the target age group,” the CM said.

In the Cabinet meeting, a detailed discussion was held over the current COVID situation.

Adityanath said his government was working to save “life and livelihood”.

“The war against COVID is being fought vigorously under the guidance of the prime minister,” he said, asking all the ministers to monitor the status of coronavirus treatment in districts.

The CM also directed to take care of migrants returning from other states and keep them at quarantine centres.

The CM said like the previous year, the success in the fight against the virus can be achieved by keeping the public aware and preventing rumours.

On Tuesday, the death toll from COVID-19 in Uttar Pradesh crossed the 10,000-mark with 162 more fatalities, while the infection tally exceeded nine lakh after detection of 29,754 fresh cases.

So far, the virus has claimed 10,159 lives in the state, which has reported 9,09,405 infections since the outbreak of the pandemic last year.

For over one hour, Richa Singh has been waiting outside the emergency ward of a government hospital here to get her mother-in-law, suffering breathing difficulties and lying inside an ambulance, admitted to the facility.

After being turned away by many hospitals, she is clueless about where to go now.

People here are having a tough time to get their ailing family members admitted to hospitals.

Lack of availability of beds for patients at COVID or non-COVID hospitals, shortage of medical oxygen, inadequate number of RT-PCR testings (considered the gold standard for COVID-19 detection) at centres — the pandemic has hit health services hard in Agra.

Singh, who originally hails from Agra rural, was waiting outside the emergency ward of the Sarojini Naidu Medical College (SNMC) and Hospital.

She was perplexed about what to do next as her mother-in-law anxiously waited inside the ambulance, struggling to breathe.

“I have been waiting to get her admitted to the hospital. She is having breathing difficulties. I am alone and not getting a clear answer as to what to do or where to go because no one has responded,” Singh said.

She lamented that she tried to get her ailing mother-in-law admitted to other facilities as well, but to no avail.

The wait is not just outside the hospitals.

Family members of COVID-19 patients were seen jostling to get remdesivir injections, an antiviral drug, and other medicines prescribed by doctors.

A long queue of people waiting to give their samples for RT-PCR tests and those at vaccination centres is also a common sight nowadays in the city of the wondrous Taj Mahal.

Private ambulance operators as the shortage of medical oxygen continues, they are left with no option but to deny patients.

Some argue that patients’ wait inside ambulances before being admitted to hospitals is taking a toll on medical oxygen availability.

Ravi Sisodia, state president of the All UP Ambulance Operators Welfare Association, said there are about 400 private ambulances in Agra district, but most of them are lying unused because of the unavailability of oxygen for ambulances.

“There is a huge demand for ambulances to drop patients to hospitals in Agra or outside the city, but due to acute shortage of oxygen, we are forced to turn them away, ” Sisodia said.

“The other reason for more consumption of oxygen cylinders is that patients have to wait for long hours in ambulances outside hospitals. Sometimes hospitals refuse to admit patients due to unavailability of beds. In that case, we take the patient to other hospitals until he/she is admitted to a facility,” Sisodia said.

Agra Chief Medical Officer (CMO) RC Pandey said, “There are 19 hospitals including private and government ones which are being used for COVID-19 patients. We are also trying our best to provide as much as help as we can to the needy.”

Asked why the patients are made to wait inside ambulances outside SNMC emergency ward, the CMO said it might be due to some other reason and claimed the ward has 50 per cent vacant beds.

Shortage of remdesivir injection and other medicines for COVID-19 treatment has posed a major challenge to the residents.

One such resident, Prajal Bhardwaj, said, “I have an urgent need for remdesivir injection for my friend’s father, but it is not available anywhere. I have called the helpline number of the health center as well, but did not get any positive response.”

The district has 2,994 active cases of the novel coronavirus.

Junk the need of CMO’s letter for admission to Covid facility: Yogi

With a man seen in a video lying before the Lucknow chief medical officer’s vehicle to get his Covid-positive mother admitted to a hospital, a former IAS officer on Tuesday urged the UP chief minister to junk the need of a CMO’s letter for the purpose.

Retired IAS officer Surya Pratap Singh, known for being vocal on various social issues, made the plea to Chief Minister Yogi Adityanath in a tweet, attaching the viral video to it.

“Yogi Ji, you are a saint. I request you with folded hands to remove this mandatory requirement of a CMO’s letter for admission of a patient to a Covid-facility,” Singh said in his tweet.

“Tears rolled down my eyes after seeing this scene,” said Singh alluding to the video.

In the video tweeted by Singh, the distraught man was also heard crying that his mother’s condition was deteriorating but he was unable to get her admitted to any hospital.

UP Health Minister Jai Pratap Singh, however, appeared to be favouring the system for having a CMO’s letter for admission to an anti-Coviod facility.

“Whenever a Covid-19 patient is registered with a control command centre, a slip is made and the patient is either sent for home isolation or to a hospital for treatment,” UP Health Minister Jai Pratap Singh told PTI, explaining the system for admission of a patient in an anti-Covid facility in the state.

“A patient goes to the hospital after the hospitals are consulted, and the bed is allotted to the patient.

On the allotment letter, the centre’s official has to sign, otherwise which hospital will admit the patient? And the person who signs the slip is the CMO,” Singh elaborated.

Apparently favouring the system, the minister added that an officer of the level of additional director has been put above the CMO to monitor the Covid-19 treatment.

“If there is no signature of the official on the slip, then how will the payment be made (to the hospitals)?” he asked.

Congress leader Priyanka Gandhi Vadra had on Monday slammed the “red-tapism” in Uttar Pradesh, alleging that lives were lost because Covid patients needed permission from the district chief medical officers to get admission in hospitals.

In a letter to the chief minister, the Congress general secretary had urged the creation of a database of available hospitals and beds so that people can seek admission directly.

She had claimed that there are reports from many places in the state that CovidOVID-19 patients require the CMO’s permission for the hospital admission.