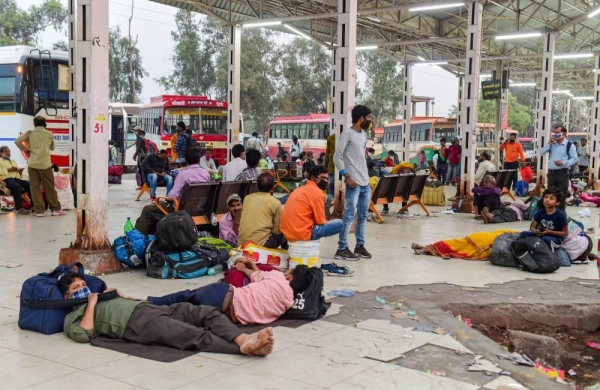 By Online Desk
NEW DELHI: The Supreme Court agreed to hear on Tuesday itself the plea of the Uttar Pradesh government against the Allahabad High Court order directing it to impose strict restrictions till April 26 in five cities amid a surge in COVID-19 cases.

Solicitor General Tushar Mehta mentioned the matter for urgent listing before a bench headed by Chief Justice S A Bobde.

Mehta, while referring to the high court’s order passed on Monday, said that “a virtual lockdown is declared by a judicial order for a week”.

He requested the bench to take up the matter during the day saying the matter relates to five big cities of the state.

While mentioning the matter, Mehta told the bench that the state government is challenging the high court order.

“Please allow me to circulate it today. These are five big cities,” Mehta said.

The HC asked the state to impose strict restrictions including closing of malls, shopping complexes and restaurants till April 26 in five cities, but stopped short of calling it a “complete lockdown”.

The court also slammed the state government for “not planning” for a second wave of the pandemic, and criticised the State Election Commission for holding the panchayat elections at this time and “exposing” poll officials to the threat of virus.

The court said in its order, “If we have not imposed a lockdown it does not mean that we do not believe in it. We are still of the view that if we want to break the chain a lockdown for a duration of at least two weeks is a must.”

“It is a shame that while the Government knew of the magnitude of the second wave it never planned things in advance,” observed the two-judge bench.

ALSO READ | Medical team on way to give medicines to COVID patient attacked in UP, four injured

It also directed the government to “consider imposition of a complete lockdown in the entire state for at least a period of two weeks”.

“This would not only break the chain of the spread of the virus but would also give respite to health workers,” it observed.

Reacting to the order, the UP government said there will be no “complete lockdown” in the cities for now.

The court also expressed displeasure over the way government and the State Election Commission “proceeded to hold (panchayat) elections forcing teachers and other government staff to perform duties exposing themselves to the threat of pandemic”.

“Further the photographs of the various places where elections were held definitely show that no social distancing was maintained. Also, we find that on many occasions in various political rallies masks were never worn by people,” it observed.

Directing authorities to take actions against erring organisers of political events, it asked them to place an action taken report by the next date of hearing on April 26.

During the course of hearing on a PIL on the condition of quarantine centres in the state and treatment of coronavirus patients, the court observed, “One would only laugh at us that we have enough to spend on elections and very little to spend on public health”.

“One cannot even imagine what will happen if only 10% of the city population gets infected and needs medical help in hospitals. How the government will manage with the presently existing infrastructure is anybody’s guess.”

In its order, the court also said, “Economy, economy and economy is the only tune that the government is all the time harping upon, but bread and butter if you take to a person who needs oxygen and medication, it will be of no use to him.”

“You may have grocery shops full of eatables and industries which produce bikes and cars but all this won’t be of any use if your medical shops run out of stock of life saving drugs like Remdesivir in the current surge of pandemic.”

The court said if people are restrained from going outside their homes for a week in the first instance, the current chain of spread of COVID infection can be broken.

“Accordingly, we are passing the directions in respect of cities of Prayagraj (Allahabad), Lucknow, Varanasi, Kanpur Nagar and Gorakhpur and we direct the government to strictly enforce them forthwith,” it said.

“All establishments be it government or private, except financial institutions and financial departments, medical and health services, industrial and scientific establishments, essential services including municipal functions, and public transport, shall remain closed till 26th April, 2021. The judiciary will, however, function on its own discretion,” the bench said.

The court further directed the government to ensure that grocery shops and other commercial shops excluding medical shops, with more than three workers be closed.

Likewise, all malls, shopping complexes, restaurants, eateries shall remain close till April 26, it said, adding all religious places shall also remain close for the period and no social function except marriage should be allowed, “In case of marriage gathering of 25 person can be allowed with the permission of the concerned district magistrate. Vegetable and milk hawkers will be allowed to sell goods on road only till 11 am and all public movement on roads will be restricted completely subject to these directions. Public movement is also permitted by court in case of medical help and emergencies.”

“We are conscious of the fact that before imposing a lockdown the concerned government has to work out various modalities. In this order, if we have not imposed a lockdown it does not mean that we do not believe in it. We are still of the view that if we want to break the chain a lockdown for a duration of at least two weeks is a must.”

Responding to the order, UP Additional Chief Secretary, Information, Navneet Sehgal said strict curbs are necessary to control the spread of the virus and that the government has taken several steps in that direction.

However, he said, alongside saving lives, protecting livelihoods is also important.

“Therefore, there will be no complete lockdown in the cities for now. People are automatically closing many places,” he said.

The number of recoveries has increased with over 10,978 patients discharged in a day, it stated.

A total of 6,61,311 people have so far recuperated from the disease in the state leaving 2,08,523 active cases, according to the bulletin.

Of the 167 fresh COVID-19 deaths, 22 were reported from Lucknow, 18 from Kanpur, nine each from Chandauli and Allahabad, 10 from Varanasi, six from Banda, and five each from Gorakhpur, Ballia, Shahjahanpur and Bahraich, it said.

Additional Chief Secretary, Information, Navneet Sehgal said over 3.84 crore samples have so far been tested for COVID-19 in the state, which included over two lakh tested in a day.