COVID-19: Migrant exodus again as Delhi, parts of UP go back into lockdown; HC fiat to Telangana government on curbs 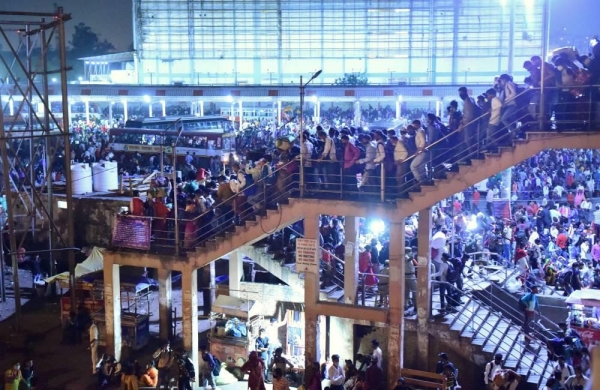 “After reviewing the entire situation, the government feels it is pertinent to impose a lockdown in Delhi for a few days… During this, all essential services with regard to food, medicine would continue” said the Chief Minister Kejriwal.

The CM added that the heathcare infrastructure in the national capital, which is reeling under an explosion of coronavirus cases, is stretched beyond capacity and the lockdown is to ensure it doesn’t collapse.

The number of containment zones in the national capital has jumped to 13,259 from 2,183 on April 1, according to official data released by the Delhi government as the city grapples to rein in the drastic surge in COVID cases.

It was a 507 percent increase in such zones between April 1 and April 18.

The number of containment zones has risen correspondingly to the increase in coronavirus cases.

While the number of containment zones has consistently risen since April 12, the biggest jump was observed on April 18, when the national capital recorded the highest daily rise of coronavirus cases.

The week from April 4 to April 11 saw a gradual increase in the number of containment zones.

It was after April 14 that the city started adding more than 1000 containment zones to the list every day.

The decision was announced after a high-level meeting with the lieutenant governor Anil Baijal.

Delhi on Monday recorded 240 deaths due to COVID-19, the highest since the pandemic began over a year ago, and 23,686 cases with a positivity rate of 26.12 per cent, according to data shared by the Health Department.

The city has reported 823 deaths due to the deadly virus in the last five days.

On Sunday, the city had witnessed the biggest jump in its daily COVID-19 tally with 25,462 fresh cases, while the positivity rate had shot up to 29.74 per cent.

Authorities had reported 161 deaths due to the disease a day ago.

The city witnessed 141 deaths on Friday and 112 on Thursday.

With the fresh cases, the national capital’s cumulative tally has risen to 8,77,146.

The death toll stands at 12,361, according to the latest bulletin.

So far, over 7.87 lakh patients have recovered in Delhi, it added.

The number of active cases in the city increased to 76,887 from 74,941 the day before, the bulletin stated.

Meanwhile, thousands of migrant workers gathered at the city’s inter-state bus terminals and railway stations to return home even though Kejriwal appealed to them with folded hands not to leave Delhi and gave a word of assurance — “Main hoon na” (I am here for you).

The announcement of a week-long lockdown led to people flocking to markets to stock groceries, essentials and run other errands.

“It was a much-needed step to break the chain of infection, said Praveen Khandelwal, secretary general of the Confederation of All India Traders (CAIT).

Long, serpentine queues were seen outside liquor shops in Delhi soon after the announcement of lockdown on Monday, with tipplers braving the sun for hours and occasionally breaking into heated arguments.

Delhi has been reporting around 25,000 COVID-19 cases daily in the past few days.

A weekend curfew was in force in the national capital from Friday evening to Monday morning.

The government on Monday set up a committee to ensure “rational” use of oxygen for treatment of COVID-19 patients, according to an order.

Hospitals in the city have been grappling with depleting supply of medical oxygen.

The order issued by the Health Department said the “Oxygen Audit Committee” will identify areas of wasteful consumption.

Kejriwal had on Sunday termed the shortage of oxygen for coronavirus patients an “emergency”.

He had also written to Union Minister of Commerce and Industries Piyush Goyal, seeking his intervention in the matter.

After the announcement, serpentine queues were seen outside liquor shops with tipplers making a beeline to stock up booze.

There were large crowds at the city’s inter-state bus terminals and railway stations as thousands of migrant workers set out to go to their native places. Kejriwal appealed them not to leave Delhi as this is a short lockdown of six days.

The HC slammed the state government for “not planning” for a second wave of the pandemic and also criticised the State Election Commission for holding the panchayat elections at this time.

The number of recoveries has increased with over 10,978 patients discharged in a day, it stated.

A total of 6,61,311 people have so far recuperated from the disease in the state leaving 2,08,523 active cases, according to the bulletin.

Of the 167 fresh COVID-19 deaths, 22 were reported from Lucknow, 18 from Kanpur, nine each from Chandauli and Allahabad, 10 from Varanasi, six from Banda, and five each from Gorakhpur, Ballia, Shahjahanpur and Bahraich, it said.

Additional Chief Secretary, Information, Navneet Sehgal said over 3.84 crore samples have so far been tested for COVID-19 in the state, which included over two lakh tested in a day.

Similarly, the Telangana High Court on Monday directed the state government to issue within 48 hours Covid-19 guidelines to minimise footfalls in liquor shops, restaurants, marriage halls and cinemas, among other crowded places.