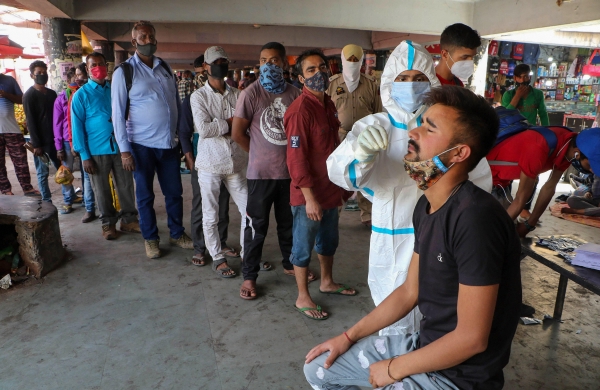 By PTI
MATHURA: The Mathura district administration Friday introduced some curbs in the wake of rising coronavirus cases, saying people coming from other states would have to undergo screening for Covid-19.

“While people with symptoms would be kept in quarantine for 14 days, asymptomatic ones would have to undergo home quarantine for a week,” District Magistrate Navneet Singh Chahal said.

He said a detailed record of such people irrespective of their places of quarantine would be maintained with their signatures.

According to officials, temple authorities have been asked to adhere to Covid-19 norms strictly with a complete ban on garland offerings and distribution of Prasadam.

Temple timings in Dwarkadhish temple has been reduced with restriction on opening of portals of the temple, Raksh Tewari, the media incharge of the temple said.

As against four times in each shift (forenoon and afternoon shift), now the portals would open only twice in each shift, he added.

This is the third consecutive day when the state has reported a record rise in COVID-19 cases.

Of these, 77,146 patients are in home isolation, 2,435 in private hospitals and the remaining in government hospitals, he said.

A total of 6,33,461 people have recovered from the infection so far, he added.

The state capital witnessed maximum of 35 deaths, while seven deaths were reported from Kanpur, five from Ballia and Ghaziabad, four from Moradabad and Allahabad, it said.

On Thursday, 2.23 lakh samples were tested.

With this, the total number of samples tested so far has risen to over 3.78 crore, Prasad said.