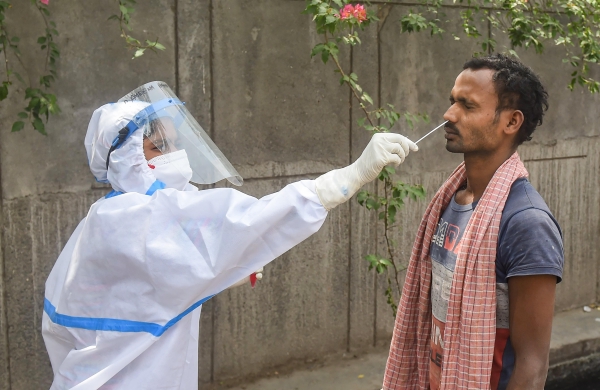 By PTI
AHMEDABAD: In the highest single-day spike so far, Gujarat reported 8,920 new coronavirus cases on Friday, taking the tally to 3,84,688, while a record 94 patients died due to the infection, the state Health Department said.

The death of 94 infected persons, the highest in a day so far, pushed the toll to 5,170, said a department release.

As many as 3,387 patients were discharged from hospitals during the past 24 hours, taking the tally of recovered cases to 3,29,781, said the release.

Both Ahmedabad and Surat recorded 26 deaths each, followed by 13 in Rajkot, 9 in Vadodara, 4 each in Morbi and Jamnagar, 3 in Surendranagar, 2 each in Dang and Sabarkantha, and one each in Devbhumi-Dwarka, Mahisagar, Mehsana, Panchmahal and Valsad, the release said. Ahmedabad city registered 2,842 new COVID-19 cases during the last 24 hours.

As many as 87.11 lakh people in the state have been given the first dose of COVID-19 vaccines, while 13.02 lakh have received the second dose so far, said the release.

A total of 147 new cases and two deaths were reported in the adjoining Union Territory of Dadra and Nagar Haveli and Daman & Diu in the last 24 hours, said a release by the local authorities.

Also, 26 patients were discharged during the day in the UT, said the release. Of the total 4,647 persons found positive for coronavirus in the territory since the outbreak, four have died, 3,770 recovered, while 873 patients are under treatment, it said.