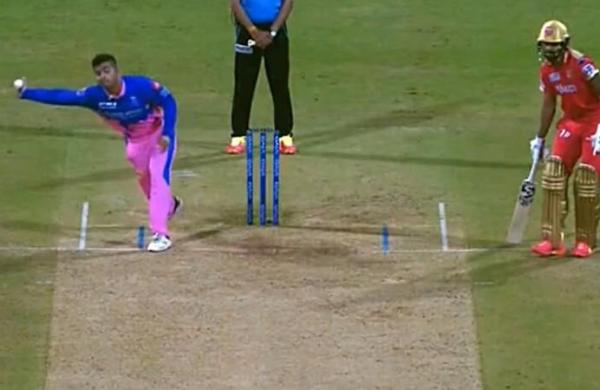 By IANS
MUMBAI: Rajasthan Royals’ (RR) Riyan Parag raised eyebrows when he used an unusually low-armed release in the 10th over during their Indian Premier League (IPL) match against Punjab Kings.

Parag bowled just one over in the explosive Punjab Kings innings and had his arm almost perpendicular to his body when he bowled the third ball of the over to Chris Gayle.

Ravichandran Ashwin had used a similar action earlier this season while Kedar Jadhav is known to use a slinging release quite frequently.

The IPL’s Twitter handle asked fans what names they can think for the action while itself calling it a “right-arm perpendicular”.

“That is right-arm perpendicular. What name can you think of for this unique action?” said the tournament’s tweet.

The commentators were taken by surprise. “How low is a legal sidearm delivery? Underarm deliveries are not allowed any more, as the Australians know well,” joked Harsha Bhogle, referring to the infamous underarm delivery bowled by Trevor Chappell in an ODI against New Zealand in 1981 on the instruction of his captain and elder brother Greg Chappell.

Michael Slater said that Parag may have got away with it and the umpire was seen having a word with the bowler afterwards.

Gayle took a single off that ball and got back on strike after the next ball. Parag ended up dismissing the former West Indies captain with a more conventional delivery off that ball.

Punjab Kings scored a mammoth 221/6 with captain KL Rahul scoring 91 off 50 balls. However, RR almost pulled off the epic chase with their captain Sanju Samson scoring an extraordinary 119 runs off just 63 deliveries. However, they fell just four runs short with Samson being dismissed off the last ball of the match and RR’s innings ended on 217/7.