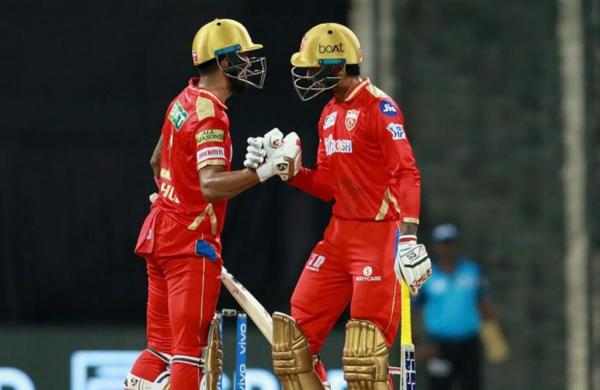 By PTI
MUMBAI: KL Rahul and Deepak Hooda pummelled the Rajasthan Royals bowlers into submission with their sensational stroke play, propelling Punjab Kings to an imposing 221 for six in the IPL here on Monday.

While Rahul smashed seven fours and five sixes in his 50-ball 91, Hooda, playing his first game since the last IPL, plundered six maximums and four boundaries as he blazed his way to 64 off just 28 balls.

He ended being the pick of the bowlers, conceding only five runs in the 20th over.

Rahul, who got his first four with a glance to the fine-leg fence, and Chris Gayle (40 off 28) gave the team a good start with their 67-run stand.

Rahul got a life’ after Ben Stokes dropped him at the fence in the seventh over even as Gayle, looked in his elements.

The duo then took on Stokes, as Gayle hit his 350th IPL six, a pull over deep square in the 8th over with Punjab racing to 70 for one.

Gayle was dropped by leggie Rahul Tewatia (0/25) off his own bowling and the very next ball, the left-hander smashed a six.

However, in the 10th over, Riyan Parag (1/7) removed Gayle, who was holed out to Stokes in the deep.

Rahul then changed gears and got to his fifty with a six over Shivam Dube’s (0/20) head in the 13th over.

Hooda then smashed two maximums in the same over and then struck three sixes off Shreyas Gopal (0/40) in the next as Punjab went ballistic.

It was Rahul and Hooda’s show at the Wankhede that made the difference to their total as the duo tore into the opposition attack on way to to their 105-run stand.

Hooda, who had made a 62 against CSK in his last competitive game in November, had stormed out of the Baroda camp ahead of the Syed Mushtaq Ali Trophy after claiming that Krunal Pandya misbehaved with him.