PM Modi roared in Bardhaman, said- Didi’s innings in Bengal is over

didi in Bengal, fours and sixes hit that century of BJP seats, innings ended, PM Modi thundered in Bardhaman, polling on 45 seats in 6 districts on April 17 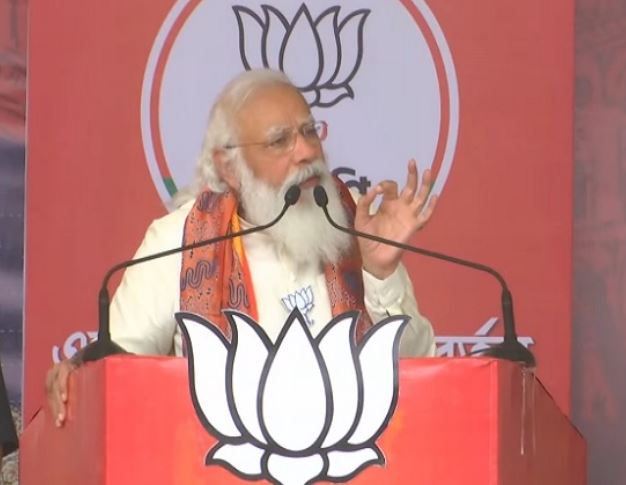 PM Modi said that in the four-phase election, the conscious people of Bengal hit so many fours and sixes that the seats of BJP have become centuries. Those who were thinking of playing with you have become very well with them. Assembly elections in West Bengal are to be held in 8 phases. There have been 4 phases of voting so far. Let us know that under the fifth phase in Bengal, 45 seats in 6 districts will be voted on April 17. In such a situation, the Bharatiya Janata Party (BJP) has tightened its back and today the party will hold public meetings in many areas of Bengal. In this episode, on Monday, Prime Minister Narendra Modi addressed a public meeting in Bardhaman, West Bengal. During this time, PM Modi attacked West Bengal Chief Minister Mamata Banerjee.

I want to tell the sisters and daughters that this servant, assuming his responsibility, has started a big scheme for every house to reach pure water from the tap. We have also sent hundreds of crores of rupees to the Government of Bengal for this. But Didi did not spend a large part of it. Our Bardhaman, called the ‘rice bowl’, people here, are longing for basic amenities. The government here could not even properly maintain the canals built in the early years of independence. Building new canals has never been in Didi’s priorities. Didi, wasn’t the mother of that police officer, a mother to you? You are so harsh, so ruthless, no mother of Bengal had any idea of ​​this. The brave young man came to Bengal two days ago to perform his duty. But here in Bengal the police officer was beaten to death. When the mother saw the dead body of her brave young son, she died. The Bengal which has a very big role in the birth of BJP, the less the BJP will serve that Bengal. Keeping in mind your every need, your every need, the BJP government will work. Didi has made a big mess in the name of governance in Bengal. To celebrate a birthday, ask TMC. If you want to build a house, give TMC a cut-money. If you want to get ration, then give TMC a catamaran. If you have to take your luggage somewhere, bring your luggage, then give cut-money to TMC. Didi has ruled Bengal in the name of mother, Mati, Manush for 10 years. But these days, mother, mother and mother are not in the meeting but Modi, Modi, Modi…. If you want to get angry then I am there, do it to me. Abuse as much as you want. But don’t insult Bengal’s dignity, Bengal’s glorious tradition.