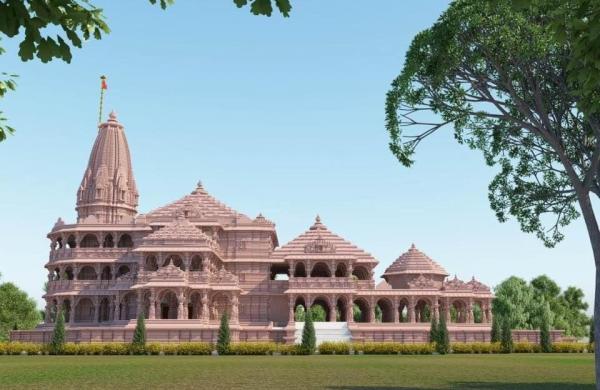 By Express News Service
LUCKNOW: With the filling work on the foundation of proposed Ram temple in Ayodhya having commenced after completing the digging and excavation work, the Ramjanambhoomi Teerth Kshetra Trust has now decided to distribute ‘Ram Rajkarn’ (holy soil of the foundation of the under-construction temple) to devotees visiting Ayodhya to pay obeisance at makeshift Lord Ram Lala temple on Janmbahoomi premises.

However, the filling of the first layer is likely to finish in 10 to 14 days, said sources. The trust has packed ‘Ram Rajkarn’ in small boxes and anyone who approaches the trust office can take it free of cost and carry it home after offering prayers at the temple.

The in-charge of trust office Sriprakash Gupta said that a decision to this effect was taken after a large number of devotees demanded the holy soil of the temple to carry back home for religious purposes.

Hundreds of tons of holy soil was removed during the digging for the foundation of the grand Ram Lala temple in 2.77 acres of land in Ayodhya. Instead of throwing away the holy soil, the trust had stored it at its workshop in Ramsevakpuram for future use.

According to Gupta, Ram Rajkaran is a gesture for hundreds of people who had laid their lives and millions of Ram Bhakts who participated in the Ramjanmabhumi liberation movement and devotees who donated huge sums for the construction of the grand Lord Ram Lala temple in Ayodhya.

He said that Rajkarn had significance in Hindu religion. Rajkaran from the birthplace of any God is considered to be the holiest among all. It is due to this reason Ram Bhakts wanted to carry the holy soil for offering prayers to Lord Ram Lala’s birthplace in Ayodhya to their homes.

Meanwhile, as per the temple trust sources, around 15,000 cheques worth around Rs 22 crore of donation amount were bounced when sent for clearance. The SBI, BoB, and PNB authorities are sending these cheques back to those who issued them to release new cheques of the amount donated.

Majority of these cheques were bounced due to amount discrepancies in words and figures. Some were issued from old checkbooks and others carry overwriting and wrong account numbers. A few of them bounced due to insufficient funds also.

Earlier on Friday, temple construction committee chairman Nripendra Misra reached Ayodhya. He met the officials of Larsen & Toubro (L&T) and Tata Consulting Engineers (TCE) on Saturday and took details on the construction work at the Ram Janambhhoomi site. The meetings will resume on Sunday and Misra is expected to meet the experts of Lee & Associates Commercial Real Estate Services who are involved in creating a vision document for the development of Ayodhya town.