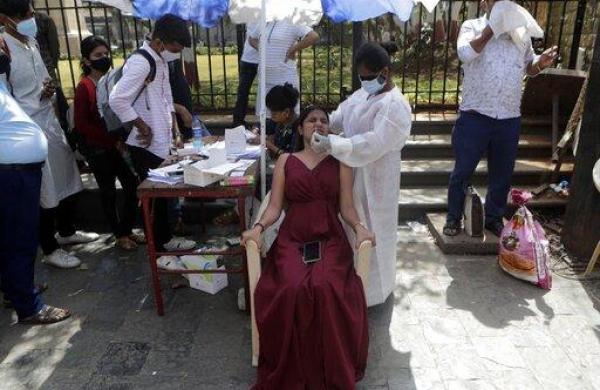 By PTI
MUMBAI: Maharashtra on Wednesday recorded the highest daily count of 59,907 coronavirus positive cases, taking the tally of infections to 31,73,261 while 322 fatalities pushed the toll to 56,652, the state health department said.

Notably, Maharashtra had added the highest number of new infections in a day on April 4 with 57,074 cases.

A total of 30,296 people were discharged during the day, taking the count of recoveries in Maharashtra to 26,13,627, the department said.

A total of 25,78,530 people are currently in home quarantine while 21,212 others remain admitted in institutional quarantine.

Meanwhile, the Army authorities have agreed to allocate 20 beds at its health facility here after the Pune district administration wrote to them seeking beds for civilian COVID-19 patients in view of a surge in cases, officials said on Wednesday.

The Pune district administration sent an SOS to the Army authorities after the surge in cases led to an increase in the number of COVID-19 patients requiring hospitalisation.

District collector Rajesh Deshmukh wrote a letter to Major General Indrajeet Singh, the General-Officer-Commanding, Dakshin Maharashtra and Goa Subarea, and requested him to provide beds at the Army Institute of Cardio-Thoracic Sciences (AICTS) for treatment of civilian COVID-19 patients.

Senior district officials said theArmy has agreed to allocate 20 beds, including 10 equipped with ventilators, for COVID-19 patients from Thursday.

“We had a meeting with the Army officials concerned. From tomorrow, they are making us available 20 beds, including 10 ICU/ventilator beds, for COVID-19 treatment for the general public,” said Deshmukh.

“Last year, from July to September, the Army had provided medical facilities for civilians at the same hospital. When the cases started declining in November, we stopped using the facility at AICTS,” said Rao.

Rao said since COVID-19 cases are rising once again in Pune, one of the 10 worst-hit districts in the country, there is a paucity of beds in hospitals, leading the administration to seek help from the Army.

Speaking about the COVID-19 situation in the district, the senior bureaucrat said as per a new assessment by the Maharashtra government, cases will peak in the city by April 20.

“Till April 20, we will see an upward trend in the number of (daily) cases.

After April 20, the trend will stabilise for the next two weeks after that a decline will start and then the wave will subside,” said Rao.

He said a similar trend was witnessed in Amravati and Nagpur districts two months ago.

“In Amravati, the positivity rate two months ago was 36 per cent. But in today’s meeting, the collector of Amravati informed that the present positivity rate (number of cases reported among the total samples tested) is 9 per cent.”

“So on that assessment, Pune is also heading towards a peak,” he added.

Pune houses the headquarters of the Army’s Southern Command and is home to large medical facilities run by the defence forces.

On Wednesday, the Pune division reported 12,772 fresh COVID-19 infections, including 5,637 in Pune city.

Minister Yashomati Thakur on Wednesday informed Chief Minister Uddhav Thackeray that Amravati district does not require another lockdown, as the COVID-19 cases are on the decline in the region.

In a statement, Thakur who is the guardian minister of Amravati district, said the daily spike is cases in Amravati division and district is between 213 to 300 in the last two weeks.

“Since the second lockdown, the number of cases is on decline. The decision to impose another lockdown can be taken if the infections increase. I met the chief minister and conveyed this to him,” she said.

Amravati district in the state’s Vidarbha region witnessed lockdowns in February-March due to a spike in COVID-19 cases.

Maharashtra on Tuesday reported 55,469 fresh coronavirus cases, the second highest spike in the last two days, taking the tally of infections to 31,13,354, while 297 deaths pushed the toll to 56,330.

The state government has imposed weekend lockdowns, night curfews among other strict curbs to break the chain of transmission in the state.

The Mumbai civic body on Wednesday issued an order, allowing home delivery of food and essential supplies through online service providers 24 hours on all days of the week during the ongoing state-wide coronavirus-induced restrictions.

“No person is allowed to stand there and consume food,” reads the order issued after a meeting conducted by the state chief secretary with municipal commissioners and district authorities.

The order also said that during the weekend lockdown, take-away from the restaurants in person will not be allowed, although home delivery is allowed.

It added that the movement of maids, cooks, drivers, house help, nurses, and medical attendee providing service to senior citizens and ailing people at home will be allowed between 7 am and 10 pm on all days during the restrictions, including the weekend lockdowns.

Eye clinics and optician shops are allowed to function within the given time-frame given by the government of Maharashtra, it said.

In the order, the civic body also said that students and candidates will be allowed to attend various examinations, including the competitive exams, during the weekend lockdowns and their hall-ticket will be considered as valid for the same.

According to the order, one guardian or parent will also be allowed to travel with the student or candidate.

The state government on Sunday announced a weekend lockdown and night curfew during the weekdays from Monday to April 30, in addition to a slew of other restrictions like the closure of private offices, theatres and salons to curb the unprecedented surge in COVID-19 cases.

The weekend lockdown will start from 8 pm on Fridays and last till 7 am on Mondays.

Besides, prohibitory orders will be in force during the daytime on weekdays.

Taking note of the surge in COVID-19 cases and the stress faced by the authorities, the Nagpur bench of the Bombay High Court on Wednesday ordered that a COVID-19 committee should be set up to tackle the issues in the district.

A division bench of Justices Sunil Shukre and Avinash Gharote was hearing a public interest litigation taken up suo moto (on its own) in 2020 at the onset of the pandemic in India.

The bench noted that coronavirus has once raised its head and perhaps in its ugliest form ever.

“We are witnessing thousands of persons testing positive for COVID-19 not only in Nagpur, but also in other cities of Maharashtra and the whole health machinery is under tremendous stress,” the court said.

It observed that private hospitals in Nagpur are full and only a few beds are available in government and civic-run hospitals.

“Health authorities are also experiencing a dearth of doctors and nursing staff. All these factors have created an emergency, which is required to be addressed comprehensively by the authorities working in the field,” the bench said.

The court noted that a new committee must be set up so that a comprehensive plan and strategy is prepared and necessary care and precaution is taken.

The committee will have to list the difficulties faced at present in Nagpur and give its suggestions.

The committee will be called the Nagpur COVID-19 committee and be headed by the Nagpur divisional commissioner and with the district collector as its member secretary, the court ordered.

Members of the committee will include the director of the All India Institute of Medical Sciences (AIIMS), Nagpur, dean of the Government Medical College and Hospital and deans of other state and civic-run hospitals there, the bench said.

“The committee shall deliberate over the present scenario, chalk out a comprehensive plan and strategy for tackling the present and future situation of the pandemic in Nagpur,” the court said.

The committee will also spell out the difficulties faced by the health authorities and by private hospitals, it said.

The court said the committee will also consider regulating admissions of COVID-19 patients to all hospitals including private ones, as there are complaints about admitting non-serious/non-deserving patients to COVID-19 hospitals.

A traders’ front of the BJP on Wednesday defied the restrictions imposed by the Maharashtra government to curb COVID-19 cases by opening a shop selling non-essential commodities.

The members of the front opened a hardware shop in Bibvewadi area, which comes under the non-essential category, to register their protest against the order.

As per the state government’s order ‘Break the Chain’, all the shops in the state under the non-essential category will remain closed till April 30 to contain the spread of the virus.

Jagdish Mulik, BJP’s city unit president, said that imposing a lockdown in Pune, which is different fromthe order of the stateis an injustice to the small traders and those workers who live hand to mouth.

“This lockdown will hit the city’s economy and people’s livelihoods will be affected. Therefore, we are protesting by defying the orders by opening the shops,” said Mulik.

Several shopkeepers under the aegis of the BJP Vyapaari Aghadi on Wednesday staged protests in parts of Nagpur city against the Maharashtra government’s directive to shut establishments selling non-essential commodities.

As per the state government’s latest curbs to control the surge in COVID-19 cases, shops and establishments selling non-essential commodities and services will have to remain shut till April 30.

The outfit demands compensation in the GST for traders and relaxation in restrictions that have been imposed, he said.

Shopkeepers and traders on Tuesday staged similar protests across the state against the state government’s latest restriction, citing that the move will severely impact small businesses amid the pandemic.

The bench has posted the matter for further hearing on April 8.