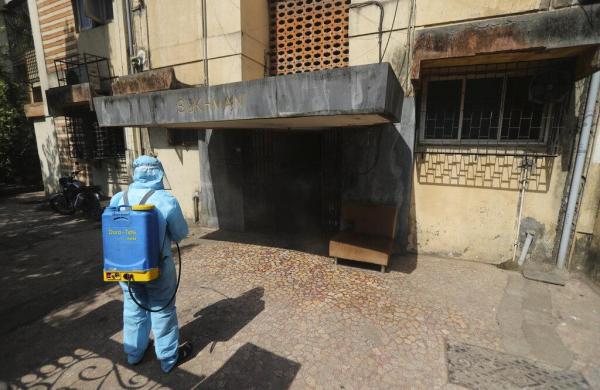 By PTI
MUMBAI: Maharashtra on Tuesday reported 55,469 fresh coronavirus positive cases, the second highest spike in the last two days, taking the tally of infections to 31,13,354, while 297 deaths pushed the toll to 56,330, the state health department said.

At the same time, 34,256 people were discharged on Tuesday, taking the count of the recoveries in the state to 25,83,331, the department said in a release.

The state’srecovery rate now stands at 82.98 per cent and the fatality rate is 1.81 per cent.

Maharashtra had reported the highest spike in daily cases on Sunday, when it added over 57,000 infections.

Meanwhile, the Brihanmumbai Municipal Corporation has restricted the entry of people at its headquarters and other offices in the city.

Except for public representatives and citizens who have urgent work or meetings scheduled, no other visitor will be allowed to enter the BMC offices, as per a circular issued by the civic body on Monday.

In exceptional cases, the department heads should issue entry passes to people on the basis of their negative RT-PCR test reports of less than 48 hours, said the circular.

Civic officials have been asked to make provisions for accepting letters and representations at the entry gates of the BMC headquarters in south Mumbai and its other offices here, it said.

They have also been directed to conduct online meetings with staff members, instead of physical meetings.

The city civic body had enforced similar restrictions last year also to control the spread of the coronavirus infection, after its outbreak here in March 2020.

It has issued a new set of Standard Operating Procedures (SOPs) for declaration of micro-containment zones and compliance of rules to stem the infection spread.

According to the SOPs issued on Monday, any housing society having more than five active COVID-19 cases will be sealed and treated as a “micro-containment zone” (MCZ).

The Brihanmumbai Municipal Corporation (BMC) has warned of imposing fines on co-operative housing societies for violating its norms and said police personnel shall be deployed at the entry gate of sealed buildings.

The SOPs asked the societies to put a board outside their gates to inform visitors about COVID-19 cases in their premises and deny them entry.

The BMC has also asked them to monitor all restrictions related to micro-containment zones.

In the SOPs, the civic body warned of slapping a fine of Rs 10,000 on a housing society for violating its norms.

Subsequent instances of violation will attract a penalty of Rs 20,000.

The civic body has asked its assistant municipal commissioners to ensure strict implementation of norms related to MCZs with the help of police.

“A police staffer shall be deployed at the entry gate of every sealed building henceforth to be addressed as a micro-containment zone,” reads a clause in the SOPs.

The civic body said online e-commerce supplies and delivery of newspapers and essential items will be done only till the housing society office.

The SOPs said no resident should be allowed to go out without concurrence of the society chairman or secretary and the police deployed at the MCZs except in cases like medical emergencies or board exams of students.

“Any asymptomatic positive patient in home isolation shall not move out of his/her flat. An FIR shall be filed by ward officials against violators,” the BMC said.

Meanwhile, the Bombay High Court on Tuesday decided to remain shut for two more days, apart from the designated holidays, in the next week.

This effectively means that the HC will remain shut for the entire week beginning April 12.

Since April 12, 13 and 14 were already declared holidays for Gudhi Padwa and B R Ambedkar Jayanti, the high court on Tuesday decided to extend the holidays to April 15 and 16 as well in view of the rising number of COVID-19 cases in Mumbai.

The HC has decided to work on June 19, July 3 and 17 (Saturdays) for availing the additional offs in the next week.

The division bench of Chief Justice Dipankar Datta and Justice G S Kulkarni on Tuesday said it would hear matters in a hybrid format (both physical and video conferencing) from April 7 to reduce the physical presence of lawyers and litigants in the courtroom due to the prevailing situation of COVID-19.

However, six other single benches that preside over criminal matters like bail pleas and so on will continue to sit physically till April 30.

Minister Eknath Shinde on Tuesday asked the authorities to ensure that there is no black marketing of remdesvir in view of the rise in coronavirus cases.

Local authorities should focus on patients who are in home quarantine by stamping their hands, putting stickers outside their homes and preventing outsiders from entering the containment zones, the state urban development minister said.

A call centre should be activated to speak to patients on a daily basis and persons under home quarantine should not venture out, he said.

If required, chairmen and secretaries of housing societies should be given temporary policing powers, Shinde said.

Efforts should be taken to ensure the rise in cases is not more than 5 per cent, he said.

The minister further said COVID-19 care hospitals and centres should have separate sections for patients with comorbidities and women patients should also be taken care of.

Food and Civil Supplies Minister Chhagan Bhujbal on Tuesday said food items served to the poor under a government scheme will be given as parcels in view of the COVID-19 restrictions currently in force in the state.

‘Shiv Bhojan’ is a pet scheme of the Maha Vikas Aghadi (MVA) government under which food is served to the poor at Rs 5 per plate.

Items under “Shiv Bhojan” thali (plate) will be given to beneficiaries as parcels in view of the fresh restrictions imposed to curb the spread of COVID-19, he said.

He said during the coronavirus-triggered lockdown last year, migrant workers, labourers and poor people benefited from the scheme.

“Due to the fresh COVID-19 restrictions, all hotels and restaurants have been asked to provide parcel service only in order to avoid crowding and maintain physical distancing.

“Hence, at Shiv Bhojan centres too, the thali will be provided in parcels. The price will continue to be Rs 5 per thali,” Bhujbal said.

As per a release issued by the Kalyan Dombivli Municipal Corporation (KDMC), COVID-19 norms were violated during a wedding held on April 3.

Guests did not wear masks, maintain social distancing and around 900 to 1,000 people were present for the function that day, it was stated.

An offence has been registered with the Mahatma Phule police station under relevant sections of the IPC and the prevalent laws, against the wedding party and the manager of the venue.

Taking a serious view of the violation, municipal commissioner Dr Vijay Suryavanshi ordered the closure of two lawns till April 30.

Civic officials also cracked down on a wedding at an open ground in Kolegaon, where around 150 people were present on Monday.

The KDMC has also sealed five shops, a social club, a supermarket and two wine shops for violating COVID-19 protocols, it was stated.

Meanwhile, in Palghar, the district rural police have registered six offences since April 1 for violation of COVID- 19 safety instructions at weddings.

Hundreds of guests attended the functions flouting the instructions and did not follow the safety norms during the function, police PRO Sachin Navadkar said.

The administration in Maharashtra’s Kolhapur district has made RT-PCR or antigen tests mandatory for people coming to the region from outside, an official said on Tuesday.

The rule, however, exempts people who have taken both doses of the COVID-19 vaccine, the official said.

“The prevalence of COVID-19 in the district is on the lower side at present, but the neighbouring districts such as Pune, Sangli and Satara are witnessing a high number of cases,” Kolhapur collector Daulat Desai said.

Travellers who want to come to Kolhapur district will have to undergo RT-PCR or antigen tests 48 hours before coming to the city and carry the negative report with them, he said.

People who have taken both shots of the COVID-19 vaccine are exempted from getting tested, the official said.

Committees have been formed in rural and urban areas to keep a close watch on the influx of people, he said.

“People without the COVID-19 negative certificates and two shots of the vaccine will have to undergo seven days of institutional or home quarantine,” the official added.

According to official figures, Kolhapur has so far recorded 52,985 COVID-19 cases and 1,794 casualties.

The district is currently left with 1,269 active cases, it was stated.

Shopkeepers took to the streets in Mumbai to protest against the Maharashtra government’s directive to keep establishments selling non-essential goods shut till April 30 to control the rise in COVID-19 cases.

As per the state government’s fresh curbs, shops and establishments dealing in non-essential commodities and services will have to stay shut till the end of the month.

According to the police, traders gathered in Borivali and Bhendi Bazaar area of south Mumbai shouting slogans and holding placards to protest the lockdown.

Traders under the banner of Borivali East Traders Association came on the roads with placards, while in Bhendi Bazaar, several protestors, including women, called for a roll back, an official said.

Leader of Opposition Devendra Fadnavis on Tuesday said there was unrest among people and small businesses over the COVID-19 curbs and the state government should speak to stakeholders again.

In a letter to Chief Minister Uddhav Thackeray, the BJP leader said the state government should talk to small businesses and the general public and issue revised guidelines.

“When you spoke to me about the need to impose strict restrictions to check the spread of the virus, we agreed since the lockdown was for two days.

But lockdown-like restrictions for the remaining five days of the week has led to unrest among people,” Fadnavis stated in the letter.

Some groups are on the streets to protest against these curbs, he said, adding that issues of several stake holders hadn’t been considered while imposing these restrictions.

“Due to the undeclared lockdown, retailers, small businesses and salons will be affected,” he said.

It is important to check the pandemic, but at the same time, there shouldn’t be a time where a question gets raised about the livelihood of people, the leader of opposition said.

AAP on Tuesday also appealed to the Maharashtra Government to withdraw the order to shut shops and restaurants as part of the curbs to check the spread of coronavirus.

The party’s state unit has written to Chief Minister Uddhav Thackeray, urging him to withdraw the government order to shut shops and businesses under the new ‘break the chain’ protocol.

The closure of retail outlets breaks the back of the economy, as their operation is a part of the chain that sustains, not only businesses and their employees, but also transport and manufacturing companies, the letter stated.

The radical lockdown decision taken by the state government is expected to have an economic impact of Rs 40,000 crore, it stated.

Hotels, trade and transport sectors in the state are being expected to bear the brunt of this damage, which will force many businesses to fire workers, incur unbearable losses, and ultimately, shut their shops permanently, the party said.

Daily-wage workers and small-scale vendors will not be able to bear the damaging impact of this new policy, given that their livelihoods are yet to recover from the 2020 lockdown.

The state cannot afford more economic losses, and hence, the government must deliberate with the Industry Association of Retailers and Restaurateurs, and come up with more viable solutions, like odd/even, ticketed entries to crowded markets, moving hawkers to playgrounds and maidans to decongest the markets, etc, the party said.

“We look forward to the government’s action to save our local businesses and economy,” AAP Mumbai in-charge Preeti Sharma Menon said.

At many places, the police ordered the shutting of shops, which did not sell essential commodities and several were penalised too, the official added.