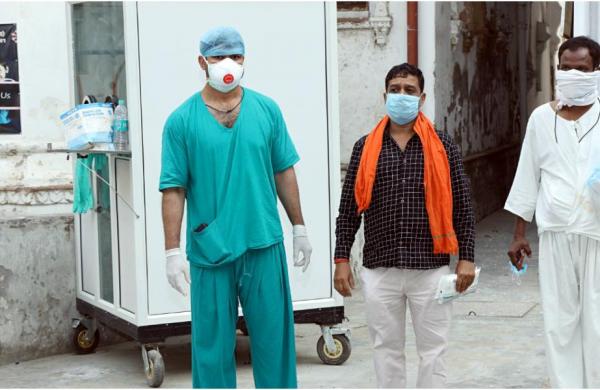 Express News Service
LUCKNOW: Uttar Pradesh is in the grip of a strong second wave of Covid-19 registering 6023 new positive cases during the last 24 hours.

It has also emerged that as many as 40 odd doctors including the Vice Chancellor of King Georges’ Medical University (KGMU) have tested positive during the last four-five days in Lucknow.

The VC, Lt Gen (retd) Dr Vipin Puri, has in fact tested positive for the second time in nine months. He had tested positive last year in August. Lt Gen Puri got infected with the virus again despite having received the second dose of vaccine on March 25.

The VC got himself tested after he developed influenza-like symptoms. KGMU sources claimed the VC, who is in isolation, has mild symptoms. The VC added that all eligible persons should take the vaccine as it prevented critical illness and emphasised that Covid protocol should be followed in letter and spirit even after vaccination.

Dr Sandeep Tiwari of the medical university confirmed that during the last four-five days, around 40 doctors in all have tested positive for COVID-19.

Most of the doctors who have tested positive had taken both doses of the vaccine.

Dr RK Dhiman, Director, Sanjay Gandhi Post Graduate Institute of Medical Sciences (SGPGIMS) and his wife had also tested positive three days ahead of Holi. He along with his wife got infected despite having received both doses of the vaccine.

Dr Dhiman was administered the Covid vaccine on January 16 and he took the second shot on February 15. When asked about the efficacy of the vaccine as cases of infection were being seen among those who had already received both the doses, Dr Dhiman said that the vaccines were very effective in preventing hospitalisation as well as deaths. After inoculation, the patient could get mild symptoms, he added.

“There is a possibility of people testing positive for Covid despite taking the vaccine shot, but the intensity of the virus would be lesser,” Dr PK Gupta, former president, IMA, Lucknow chapter, also emphasised.

Another successful doctor couple in their 60s, who too received both doses of Covid vaccine last month, have now been found to be Covid positive in the city.

Dr Sunil Verma, a leading physician in the city, echoed the view that the vaccine saved people from getting chronically sick.  “It potentially saves us from getting critical and needing ICU, ventilator and oxygen support and helps weaken the mechanism of the disease in the body,” Dr Verma said.

He cautioned by saying that getting the vaccine did not mean that those inoculated can turn complacent. “Everyone has to continue wearing masks, maintain social distancing and follow Covid protocol even after getting vaccinated. Also, after taking the second dose, one has to be extra cautious for at least two weeks and follow all precautionary measures,” he said.