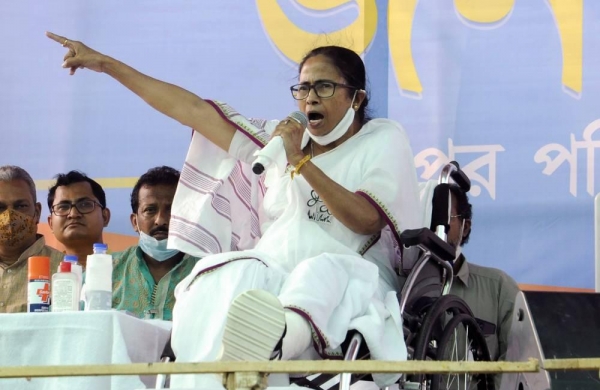 By PTI
BANESWAR: West Bengal Chief Minister Mamata Banerjee on Wednesday alleged that “BJP’s CRPF” was harassing and killing people besides obstructing voters from entering polling stations in the state at the behest of Union Home Minister Amit Shah.

Addressing a rally here in Cooch Behar district, she accused a section of the central force of molesting women and beating people during the ongoing assembly elections.

Launching a blistering attack on Shah, the TMC surpremo charged him with failing to protect lives of the security personnel in naxal ambush in Sukma and earlier in terrorists attack in Pulwama and instead seeking votes in other states for his party BJP.

Banerjee facing a stiff challenge from the saffron party in the ongoing Bengal elections appealed to the voters to ensure more than 200 seats for the TMC “or else the BJP will bribe the ‘traitors’ of my party to crossover to their side”.

“The ‘BJP’s CRPF’ is beating women, harassing and killing people. They are obstructing voters from entering polling booths and to cast their votes. Union Home Minister Amit Shah has instructed them to do so.

“I have never given such orders to the police being the home minister (of West Bengal),” Banerjee said at the rally.

Continuing with her tirade against the cental force, she said “I respect the CRPF. But, I do not have respect for those among them who are working at the behest of the BJP. The CRPF should not obstruct the public from casting their votes.”

Referring to death of 22 security personnel in naxal attack in Chhattisgarh’s Sukma-Bijapur three days back, she asked what steps have been taken for those who lost their lives? She said that instead of doing anything for those killed in the attack, Shah was asking electors (in different states having elections) to vote for his party.

“You (Shah) failed to protect lives of your policemen in Pulwama and in Sukma. What has the government done for those killed in Sukna? On one side they are killing people and on another side you are asking voters to cast vote to your party. You should be ashamed of doing so,” she said taking a swipe at the union home minister.

Claiming that more than 10 people have been killed in the state during the ongoing polls, Banerjee urged the Election Commission of India (ECI) to ensure that the CRPF personnel play a responsible role and no such killing take place in the forthcoming five phases.

ALSO READ | I will win Bengal with one leg and Delhi with two: Mamata Banerjee

“More than 10 people have been murdered. This never happened during my time. We all want peaceful polling so that people can cast their vote. We want peaceful, free and fair elections.

A schoolgirl was allegedly molested by a central force police personnel in Tarakeswar Monday following which the EC had removed him from duty.

“Several cases of molestation of girls by the central forces personnel have surfaced.

Why are they (central forces) molesting girls? Complaints have been lodged and I will request you (EC) to please take care of that also,” she said.

Referring to Tuesday’s incident when party’s Arambagh candidate Sujata Mondal was chased in an open field by people wielding bamboo sticks and iron rods and then hitting her on the head with sticks, the CM alleged that some senior police officers have entered into an “understanding” (with the BJP).

She said activities of such policemen were under the scanner.

“Lower-rank policemen have nothing to do. It’s those in the higher ranks who have entered into an understanding with them. I have realised this during yesterday’s polling in Arambagh (where party candidate Sujata Mondal was allegedly attacked).

“I have also noticed role of Officer-in-charge of Arambagh police station. We are keeping an eye on such things,” she said.

Five candidates, including two women, were assaulted, while clashes between rival political groups erupted during the third phase of polling in the state on Tuesday.

Cautioning the voters not to trust the policemen, Banerjee advised them to put up resistance in groups if prevented by the CRPF from going to polling stations to cast their votes.

“Do not trust the police because during the elections they have been influenced by the BJP.

If needed form groups and gheraoe them and keep them busy in talking, while others will quickly go and cast their votes,” she suggested.

“I will win wherever I contest from. But, you (voters) will have to ensure we get over 200 seats to protect democracy, or the BJP will use their money power to buy traitors,” she said.

Earlier, speaking in the same rally, urging voters to vote for party candidate Binay Krishna Barman in Cooch Behar Uttar (SC) constituency, Banerjee hit out at the BJP, stating they were befooling people in the name of implementing Citizens Amendment Act (CAA) and National Registers of Citizens (NRC).

She alleged that if the BJP is voted to power in Bengal they will put people in detention camps like the 14 lakh Bengalis in Assam.

“All these promises of the BJP are false. They will never implement them. And if you vote for you will be put in detention camps like the 14 lakh Bengalis in Assam,” she said.

The CM further accused the BJP of spreading misinformation about raising a Narayani Sena central paramilitary force after the polls citing an unverified RTI reply by the Centre.

The demand for Narayani Sena has been a long-standing demand of the Rajbanshi community in north Bengal.