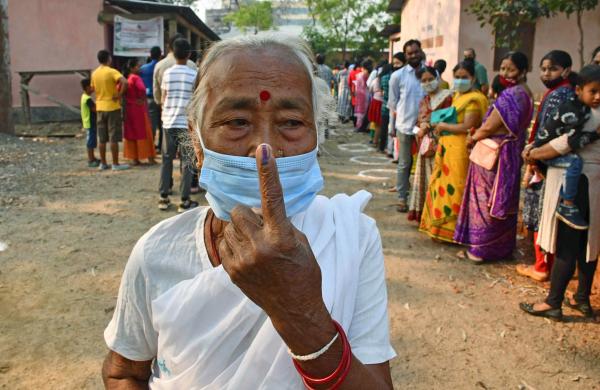 By PTI
GUWAHATI: Polling was underway peacefully amid tight security at the 40 assembly constituencies in Assam where voters were exercising their franchise in the final phase on Tuesday, officials said.

Voters wearing masks were seen queuing up outside polling booths, maintaining distance by standing in marked circles across the 12 districts in lower Assam where voting was underway.

The voters who did not have masks were provided with one, besides a disposable plastic glove before they were allowed to enter the polling booths.

No untoward incident has been reported so far, police said.

The first voters at the polling centres were greeted with saplings and the senior citizens with ‘gamosas’ (traditional Assamese scarf).

All of them are in the fray in this phase.

For the convenience of the senior citizens and physically challenged voters, arrangements for wheelchairs and e-rickshaws were made.

Many of the booths also had seating areas, in rainbow shades, themed on inclusivity and LGBTQ rights.

Many polling centres were decorated with recyclable items, having art installations made with bottles, plastic wrappers, etc.

Some of the voting centres were also decked up, representing the multi-cultural diversity of the state.

Ethnic fabric and handicraft items were on display, besides mannequins wearing tribal attires put up at the selfie zones.

The Assamese festival of Bihu was also a popular theme in several polling booths.

Arch gates were set up, besides the seating areas decorated with colourful chairs, giving the voting centres a festive look.

At a voting station in Goalpara, the women polling personnel wore identical mekhela and chador — an Assamese traditional attire.

The polling will continue till 6 pm.