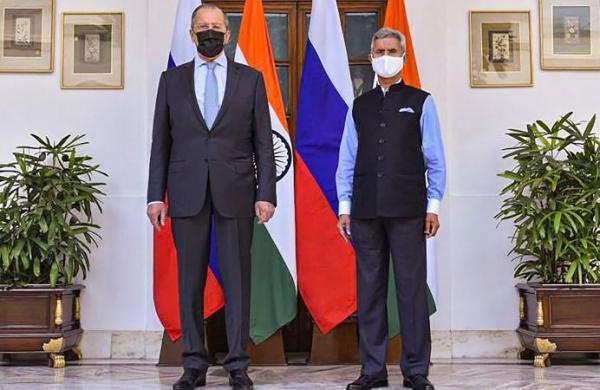 By PTI
NEW DELHI: External Affairs Minister S Jaishankar and his Russian counterpart Sergey Lavrov on Tuesday held extensive talks with a focus on various aspects of bilateral ties and preparations for the annual India-Russia summit.

“A longstanding and time-tested partner! EAM @DrSJaishankar welcomes Minister of Foreign Affairs of the Russian Federation Sergey Lavrov,” External Affairs Ministry Spokesperson Arindam Bagchi tweeted along with a photograph of the two ministers.

Ahead of his visit, the Russian embassy said on Monday that Moscow attaches great importance to collective work based on the principles of goodwill, consensus and equality, and rejects “confrontation and bloc-type approaches”.

It said the Special and privileged strategic partnership with India is one of Russia’s foreign policy priorities.

The embassy said Lavrov will discuss topical issues of bilateral relations with an emphasis on the forthcoming “highest level” meetings as well as implementation of outcomes of the 20th Russian-Indian summit held in Vladivostok in 2019.

Officials said various aspects of bilateral ties and preparations for the annual summit figured in the talks.

The India and Russia annual summit was postponed last year because of the COVID-19 pandemic.

Both the countries have a mechanism under which India’s prime minister and the Russian president hold a summit meeting annually to review the entire gamut of ties.

So far 20 annual summit meetings have taken place alternatively in India and Russia.

Russia has been a time-tested partner for India and the country has been a key pillar of New Delhi’s foreign policy.