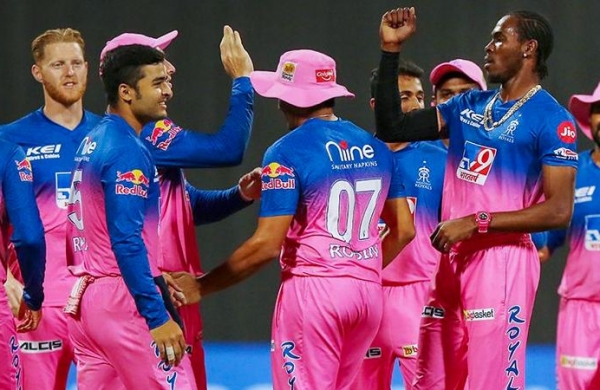 By IANS
JAIPUR: Rajasthan Royals (RR) launched their Indian Premier League 2021 season jersey through a 3D projection and light show at the Sawai Mansingh Stadium in Jaipur. The show was broadcast live from the stadium to fans around the world and to RR players in their bio-bubble in Mumbai.

RR, champions in the inaugural edition in 2008, will miss playing at their home venue in Jaipur once again after the BCCI picked just six host venues for this season and also ensured that no team gets to play at home.

The audio-visual show, depicting the stadium, the city of Jaipur, Rajasthani culture and landscape, was held in partnership with Red Bull.

“The show began with Sawai Mansingh Stadium being lit up, from the pitch to the stands. The limelight was then placed on a screen set up especially for the live show where a video montage of the stadium, city and Rajasthan landscape were interspersed with high-speed action shots of Red Bull vehicles and events. The Royals players were 3D projected on the screen, wearing the jersey for the new season, giving fans a first-ever look at the pink and blue jersey they will wear in (the) 2021 (season),” said a statement from the team.

“Unbelievable reveal of the new jersey. From 2015 till now the jersey has changed a lot since the last time I played for Royals, and it is a beautiful jersey. I’m excited to be a part of this team again and proud that the (RR) foundation is the main driver behind the design,” the Proteas all-rounder, who was the most expensive buy ever in IPL history, was quoted as saying in the statement.

Morris was bought for Rs 16.25 crore at this season’s mini-auction.

Another RR all-rounder, Riyan Parag said: “Last year, Rajasthan Royals team was wowed witnessing Dani Roman (professional skydiver and base jumper) fly down to the beachside of our hotel in Dubai to reveal and hand over the IPL 2020 team jerseys. This year, another epic jersey reveal. We look forward to making our fans proud this season.”

The franchise statement described the jersey for the new season as, “eye catching and socially powered”.

“Consisting of four unique and special elements which serve as the Royals’ bastion of making a social difference through cricket, the jersey is dedicated to how the team has been working with empowered women through their Royal Rajasthan Foundation and impacting the lives of millions of women in their home state of Rajasthan,” the statement said.”Whether it is planting 14,000 ‘Khejri’ trees to raise groundwater levels, harnessing and cultivating the unique creativity and talent of women to weave rugs, addressing and providing help to women dealing with less talked-about issues such as mental health and menstruation these special elements on the carefully curated jersey mean more to the Royals than just being an item of knitted clothing.”