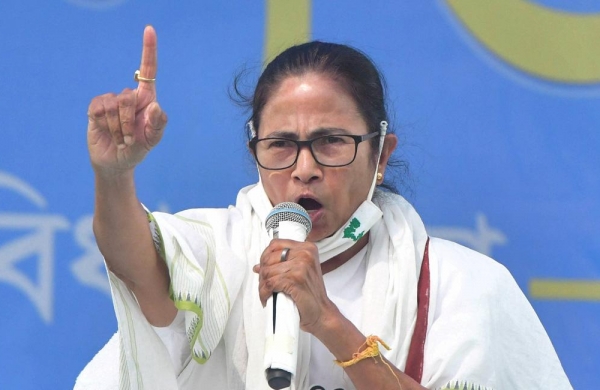 By PTI
CHUNCHURA/BHANGAR: West Bengal Chief Minister Mamata Banerjee on Monday attacked the Indian Secular Front (ISF), floated by an influential Muslim cleric and part of the alliance of the CPI(M) and the Congress, alleging that parties like it are “more dangerous than a cobra”.

Referring to the BJP’s allegation that she indulged in the politics of minority appeasement, Banerjee claimed that Hindus and Muslims are living well in the state since she is there.

The Trinamool Congress supremo also asserted that she would win the ongoing state polls despite suffering an injury and eventually aim for power in Delhi.

Launching a scathing attack on ISF leader Abbas Siddiqui without naming him, she said, “A traitor has emerged from Furfura Sharif who has taken money from the BJP. You must remember that you can’t win in Bengal through treachery.”

The CPI(M)-headed Left Front and the Congress have joined hands with the newly-formed ISF floated by Siddiqui, an influential Muslim cleric of Furfura Sharif in Hooghly district of West Bengal.

Speaking at a rally at Bhangar in South 24 Parganas district which has a considerable minority population, Banerjee asked people not to vote for the ISF candidate there, claiming that every vote for him will mean gain for the BJP.

“Some say I appease the Muslims. I tell them that both Hindus and Muslims are living well since I am there. It would not have been the case had I not been there,” she said.

Claiming that the CPI(M) and the Congress are friends of the BJP, the TMC supremo said that another party has surfaced to eat into the minority vote share of her party.

“Has he suddenly become the leader of minorities with the BJP’s money? He is making communal statements,” she said referring to Abbas.

It is because of such parties that the RJD-led Mahagathbandhan lost in Bihar and the Samajwadi Party (SP) lost elections in Uttar Pradesh, Banerjee claimed.

“They are more dangerous than a cobra,” she said.

Training her guns at Prime Minister Narendra Modi and Home Minister Amit Shah who are crisscrossing the state canvassing for the party, Banerjee said that West Bengal will be ruled by its own people and not by anyone from Gujarat.

“I will win Bengal with one leg and Delhi thereafter with two legs,” Banerjee who is seeking a third term in office, said describing herself as a Royal Bengal Tiger.

She said that she suffered injuries, which were allegedly inflicted on her by BJP supporters in Nandigram on March 10, to prevent her from campaigning for the West Bengal assembly polls.

However, after going through the report of poll observers, the EC had concluded that the Nandigram incident was an accident and not a planned attack.

Criticising the Central government over Saturday’s Naxal attack in Chhattisgarh in which 22 security personnel were killed, the Trinamool Congress boss accused the BJP of not governing the country properly and concentrating on West Bengal elections.

Lambasting the BJP for bringing leaders to Bengal from all over the country, who “are camping in the state to win the elections”, Banerjee said at a public meeting in Chunchura that the saffron party is fielding its sitting MPs for the assembly polls since it has a dearth of suitable candidates.

The BJP has nominated its Lok Sabha MP Locket Chatterjee and Rajya Sabha member Swapan Dasgupta for the assembly polls.

Banerjee, who has been accused by the prime minister of showering abuses on him on different occasions in the run up to the elections, said that she does not care about Modi calling her “Didi..o…didi” in a tone which some TMC women leaders have termed as sarcastic.

“He does this every day, I don’t care,” Banerjee said.

Wondering why the assembly election is being held in the state in eight phases, she said, “It could have been done in 3 or 4 phases.

Was it not prudent to hold the elections in fewer phases and wrap it up early in view of the COVID-19 situation?” Banerjee also claimed that the coronavirus situation is not grim in the state till now.

The country recorded an all-time high of 1,03,558 coronavirus infections in a day pushing the nationwide COVID- 19 tally to 1,25,89,067, according to the Union Health Ministry data updated on Monday.

In West Bengal, 1,957 more people had tested positive for the infection on Sunday.

Claiming that fingers are raised only against TMC leaders in connection with the Saradha chit fund scam and Narada tapes scandal, Banerjee said that those involved in it but are now in the BJP are not being touched.

Banerjee asserted that she will not leave an inch of land to the BJP as long as she lives.

She claimed that BJP is involved in spreading false propaganda that it will win the West Bengal elections.

“The BJP is a party of thieves,” she said.