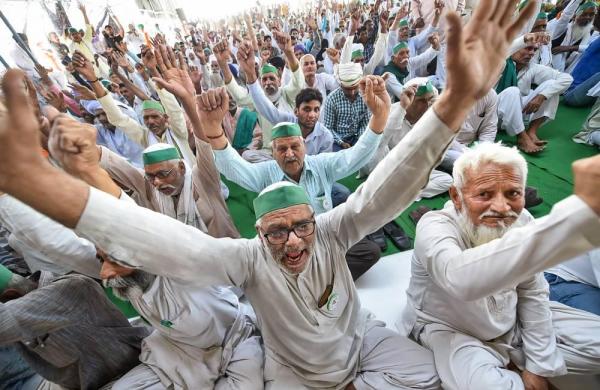 By PTI
AHMEDABAD: Refuting claims that farmers have left protest sites along the Delhi border, Bharatiya Kisan Union leader Rakesh Tikait on Sunday said they had gone to the fields to work and would return when the Central government was “free from West Bengal elections”.

Farmers, mainly from Punjab, Haryana, western Uttar Pradesh and Rajasthan, have been protesting at the Delhi border for over 4 months now against the Centre’s three agri marketing laws, and have demanded its repeal along with a legal guarantee on the minimum support price mechanism.

Tikait, who reached Gujarat to drum up support for the stir, began his two-day visit by praying at the Ambaji Temple in Banaskantha district and then addressing groups in Ambaji and Palanpur.

At a meeting held in Palanpur, a black flag was shown to Tikait by a youth, following which he was thrashed by supporters of the farmer leader.

The youth was then taken away by police personnel.

Later, Tikait said, “Let them show black flags, it does not matter. I have come here to make the people of Gujarat, the media, farmers, and the youth free. Let farmers and the youth join the agitation”.

Tikait told the gathering that the three laws were enacted to help businessmen and not farmers, and the latter had decided to not move from the protest sites till victory, that is acceptance of all their demands, was achieved.

“All reports that farmers have left the agitation sites are wrong. Farmers come and go. At present, they have gone to work in their fields. We have told them to come back once the government is free from (West) Bengal elections. The entire government is camping in Bengal. Once the government returns, we will start negotiations with it,” Tikait claimed.

He said farmers from Gujarat must also join the protest in large numbers so that the country feels confident that cultivators from the state from where some of the big leaders hail, a possible reference to Prime Minister Narendra Modi and Union Home Minister Amit Shah, are also against the new laws.

Exhorting farmers from Gujarat to use tractors to protest, Tikait said these vehicles are the “tanks of farmers” and were put to good use in Delhi to remove police barricades.

While former Gujarat chief minister Shankarsinh Vaghela accompanied Tikait in his rally from Ambaji to Palanpur, Congress MLA Geniben Thakor welcomed the BKU leader when he entered the state earlier in the day.

Incidentally, Tikait had taken a swipe at the BJP government in Gujarat earlier in the day by showing his passport to reporters while entering the state after alighting from a train in Abu Road in neighbouring Rajasthan.

Asked about whether he was carrying a COVID-19 negative certificate, which is mandatory while travelling to Gujarat, Tikait showed his passport and said, “I have all the documents with me. This is my passport if it is required to enter Gujarat”.

Tikait will visit Sabarmati Ashram on Monday and go to Bardoli on the second day of his Gujarat visit.

The BJP is “provoking” the youth to indulge in violence and trying to give a “violet twist” to the stir against its three farm laws, alleged BKU national president Naresh Tikait citing the attack on farmer leader Rakesh Tikait’s convoy in Rajasthan’s Alwar recently.

Police had detained a student leader, whom the Bhartiya Kisan Union claimed belonged to the ABVP, the student wing of the BJP.

Tikait was not in his car when the convoy was pelted with stones.

The BJP-led Centre is “providing weapons” to the youth and “provoking” them to indulge in violence, Naresh Tikait said, alleging that the Alwar attack was carried out by ABVP workers.

We have forgiven them as we don’t want to spoil their career and have asked the Rajasthan government not to take any legal action against them, the BKU leader said during a “Kisan Mahapanchayat” at the Ghazipur protest site.

The government is trying to give a “violent twist” to the peaceful protest, for which attempts have been made at several times, Tikait alleged, adding that farmers don’t want any confrontation with the government.

Tikait also said the government did not utter even a single word on the demise of 300 farmers during the course of the agitation.

Tikait also said MPs and MLAs of the ruling party are facing humiliation in villages as they are unable to respond to farmers’ queries.