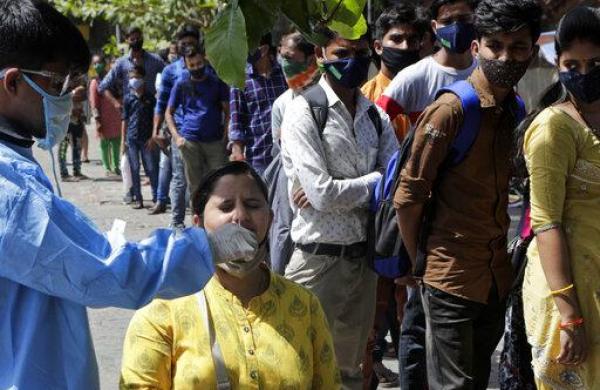 By PTI
NEW DELHI: Maharashtra and Punjab are the two worst hit states in terms of their share in the total number of new cases and fatalities across the country in the last fortnight, according to official documents.

The two states also top the charts among states or UTs that have crossed their ever-reported peaks for new cases and are followed by Chandigarh, Chhattisgarh and Gujarat in the top-five, shows a presentation made by the Union Health Ministry during the last review meeting held by the Cabinet Secretary with all states and union territories.

The growth rate of last seven days for daily new cases till March 23 in Maharashtra was 3.6 per cent and in Punjab it was 3.2 per cent.

Of all deaths which happened during the two weeks period ending March 31, Maharashtra and Punjab together reported around 60 per cent of India’s fatalities.

According to the health ministry, 11 states — Maharashtra, Punjab, Karnataka, Kerala, Chhattisgarh, Chandigarh, Gujarat, Madhya Pradesh, Tamil Nadu, Delhi and Haryana have been categorised as “states of grave concern” on account of their high and rising daily case and higher daily deaths They have contributed 90 per cent of COVID cases, 90.5 per cent of deaths in 14 days till March 31, and have crossed or close to crossing their early reported peaks last year, it said.

After detailed and comprehensive review of measures taken by states and UTs, the Cabinet Secretary on April 2 reiterated the necessity of meticulous and hard work regarding stringent enforcement of containment and surveillance measures, in conjunction with ramping up vaccination and strict enforcement of COVID appropriate behaviour.

The states were specifically asked to increase testing continuously to ensure that positivity comes down to 5 per cent or less than that, focus on ensuring RT-PCR tests comprise 70 per cent of total tests, reduce waiting time of test results with regular review with testing labs, use Rapid Antigen Tests (RAT) as screening test in densely populated areas and where fresh clusters are emerging and ensure that all symptomatic RAT negatives are mandatorily subjected to RT-PCR tests.

They were also asked to ensure effective and prompt isolation of those infected in institutional facilities (COVID Care Centres) and that patients isolated at home are to be monitored daily.

Isolated infected persons should be transferred immediately to health facilities, if required.

They were asked to ensure that 25 to 30 such close contacts are traced for each infected person.

In order to minimize daily fatalities, the states were advised on strengthening of public and private healthcare resources.

They were specifically asked to increase the number of isolation beds, oxygen beds, ventilators/ICU beds as per requirement, plan for adequate oxygen supply, strengthen ambulance service and reduce response time and refusal rate with regular monitoring by local administration and ensure adequate number of contractual staff and optimum rostering of duties.

Use of Police Act, Disaster Management Act and other legal/administrative provisions for imposing penalties on defaulters was underscored for immediate compliance by states and UTs.

They were asked to focus on markets, fair/melas, social and religious congregation that could become super spreader events while enhancing awareness that COVID appropriate behaviour is equally important as vaccination, and this needs to be followed even after vaccination.

In order to saturate vaccination for priority age groups in districting reporting surge in daily COVID cases, the states and UTs were advised to make time-bound plan of 100 per cent vaccination of eligible people and coordinate with the Union  Health Ministry to ensure adequate vaccine doses.