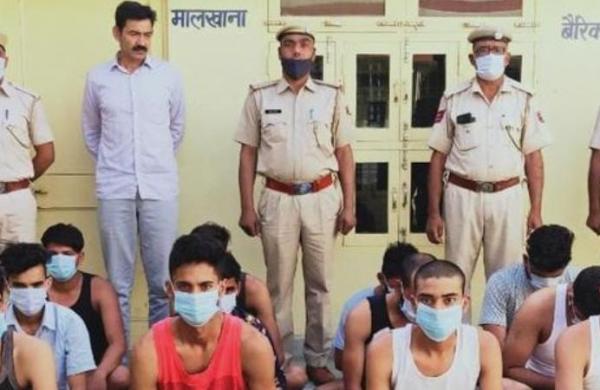 Express News Service
JAIPUR: The attack on farmer leader Rakesh Tikait in Alwar on Friday was organised by a student leader of the Akhil Vidyarthi Parishad (ABVP) to garner publicity. Kuldeep Yadav, a student leader associated with ABVP, currently under arrest for the attack on Tikait’s convoy, has reportedly made this confession during interrogation by the Alwar police.

Kuldeep Yadav had become the President of the Alwar-based Matsya University in 2019 as an independent candidate. Later he joined the ABVP and senior BJP leaders had attended some of the functions he organised.

On Friday, Kuldeep Yadav, along with his supporters, showed black flags when the cavalcade of Rakesh Tikait was on its way to Bansur from Harsora village where the BKU supremo had addressed a gathering. This is when 33 people, according to the first information report (FIR), stopped his car on the pretext of welcoming him. Soon stones were pelted at the convoy of Rakesh Tikait, damaging the rear windshield of his car. The violent group reportedly broke the windows of the car with sticks and even threw black ink.

Sixteen people have so far been arrested on charges of attacking Rakesh Tikait’s convoy in Tatarpur village of Alwar district. An initial probe by the police has also revealed that Kuldeep Yadav even spent around 50,000 rupees to gather the youngsters who joined him in the attack on the BKU leader.

Soon after the attack, not only Rakesh Tikait but even Rajasthan Chief Minister Ashok Gehlot had taken to Twitter to slam the BJP for the attack on the convoy of the BKU supremo.

Kuldeep Yadav had to resign shortly after he became the President of the Alwar-based Matsya University in 2019 as there were allegations that his BA degree was fake.

Though the BJP denies any links with the arrested student leader, a string of pictures that show Kuldeep Yadav with senior BJP leaders have now gone viral on social media. Among those who are seen with Kuldeep Yadav are state BJP chief, Satish Poonia, MP of Alwar, Baba Balaknath and ABVP state Secretary Hoshiar Meena.

The additional SP of Alwar Gurusharan Rao remarked, “Kuldeep Yadav is trying to create a political space for himself and he has told us that he hoped to create a special identity for himself by organising this attack on Rakesh Tikait.” He further added, “Yadav had borrowed 3 lakh rupees from his uncle and spent about 50,000 on the youngsters who supported him in organising this attack.”