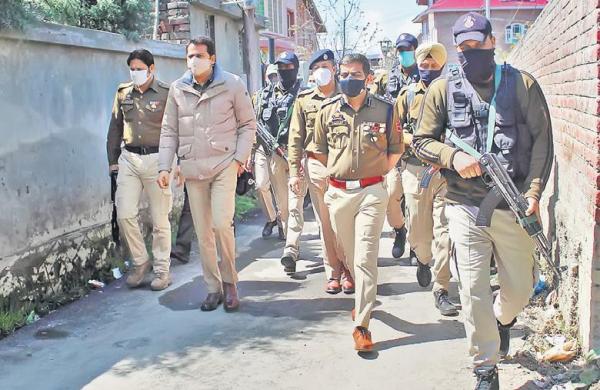 Express News Service
SRINAGAR:  In the third attack within a week, militants on Thursday attacked the residence of a BJP leader in Nowgam area in outskirts of Srinagar, killing a policeman and snatching his service weapon.

Blaming Lashkar-e-Toiba, the police claimed four militants launched the attack targeting BJP leader Mohammad Anwar Khan at Aaribagh, Nowgam in the outskirts of Srinagar. It was the second such attack on BJP activists in three days.

Anwar, who is district general secretary of Baramulla and in charge of Kupwara, was not present in the house at the time of attack. His family members, however, were present inside.

In the militant attack, policeman Rameez Raja sustained multiple bullet injuries and was rushed to SMHS hospital, where doctors declared him brought dead.

Before fleeing from the spot, militants decamped with the service weapon of the policeman.

Top security officials and a contingent of police and CRPF reached the spot and launched a search operation in the area. The police took over CCTVs installed at Khan’s house to analyse the footage.

“When the policeman opened the door, two militants fired at him indiscriminately and another militant came and snatched his service rifle.”

Two militants were identified as Shahid Khurshid and Obaid Shafi, both hailing from Srinagar, the IG said.  Of the three attacks in the Kashmir Valley, two were in Srinagar.

On March 25, militants had attacked a CRPF vehicle at Lawaypora area in the outskirts of Srinagar, killing three paramilitary personnel and injuring another.

Four days on, militants attacked the municipal office in Sopore in north Kashmir’s Baramulla district and killed two BJP councillors and a policeman.  BJP general secretary (organisation) Ashok Kaul asked the government to increase the security of the party leaders in the Valley.