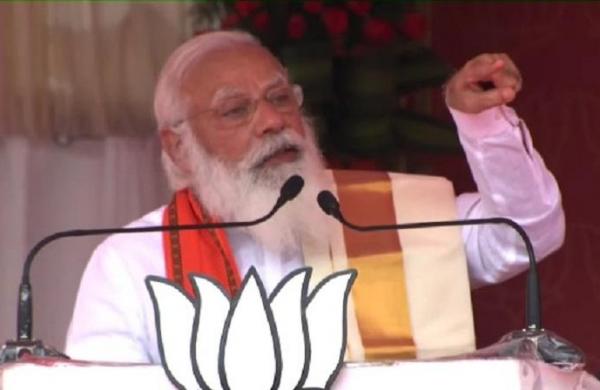 Express News Service
GUWAHATI: Prime Minister Narendra Modi on Thursday claimed the people in football-crazy Assam had shown the red card to the “Mahajot” in the first two phases of Assembly elections.

“The whole of India knows football is very popular among the youth here. Given the sense I am getting after the two phases of polls, I tell you in their words, the people have shown the red card to Congress-AIUDF (All India United Democratic Front),” Modi said at a rally in Kokrajhar while campaigning for the United People’s Party Liberal (UPPL) candidate.

The UPPL as well as Asom Gana Parishad is an ally of the BJP. The Congress leads the ten-party grand alliance that also has the AIUDF.

“People’s trust is in the NDA. The Mahajot will come and tell you about big things but the people of Assam have to be wary of them,” Modi said.

He said this election is between the “Mahajuth” of “Mahajot” and the “Maha Vikash” of the double engine.

“The Congress instigated people from the valleys and the hills and made them fight. The NDA united them through the bridge of development. The Congress is responsible for the encroachment of land in satras and namghars (Vaishnavite prayer centres). The NDA freed them,” the PM said.

He said the NDA had made an honest attempt to take the Bodoland Territorial Region (BTR) to the path of peace and development.

“The Congress’ long tenure in power had pushed Assam to bombs, guns, and blockades. The NDA ensured peace and respect. Remember, it was Atalji’s (former PM Atal Behari Vajpayee) NDA government that gave the BTC (Bodoland Territorial Council) to you. Even the present NDA government signed the BTR agreement for permanent peace in Bodoland,” Modi said.

Stating that peace has returned to Assam after a long time, he said the NDA was committed to helping those “friends” who had abjured the path of violence. He appealed to those still wielding the gun to join the NDA’s mission for peace and progress.

“We all know how the Congress’ misgovernance allowed Kokrajhar to suffer for years. The people have not forgotten that run of violence. The then Congress governments in the state and at the Centre silently watched the tamasha. They are now trying to deceive Bodoland again,” Modi said.