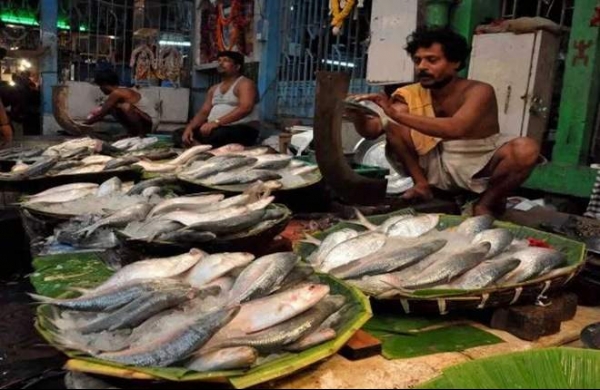 By PTI
KOLKATA: Hilsa, the darling of fish lovers across West Bengal and Bangladesh, could be breeding upstream in the mighty Ganges later this year, after almost four decades of being locked out by the Farakka barrage across the river.

A new navigation lock is in the making at the barrage — created to save Bihar and West Bengal from flooding and to generate hydel power — to enable hilsa breeding in the next few months.

Fish connoisseurs along the Ganga, up until Uttar Pradesh’s Allahabad, maybe able to savour fresh hilsa as the project will make way for their travel upstream from beyond the Farakka, said a top official of L&T Geostructure.

The Inland Waterways Authority of India (IWAI) had contracted L&T GeoStructure for the new Farakka navigation lock in Murshidabad district, as a part the Jal Marg Vikas Pariyojana, and said it will make a special arrangement to allow easier passage of the hilsa.

The movement of the popular fish in the Ganges till Allahabad came to a halt after construction of the old Farakka navigation lock in 1976, officials said.

“The new Farakka navigation lock is expected to be complete by June,” S Kanappan, Head and Chief Executive of L&T Geostructure, said.

The Centre had said in 2019 that based on research on the breeding season of the hilsa, the operation of navigational lock will be regulated to facilitate their movement from the Hoogly-Bhagirathi river system upstream to the main Ganga river and vice-versa.

Kanappan said due to the inefficiency of the existing navigation lock gate at Farakka, about 280 km from Kolkata, the IWAI proposed a new one, which will feature modern features like electro-hydraulic and remotely-controlled operation of all gates from a control room.

The new navigation lock will entail an investment of around Rs 361 crore, the officials said.

Hilsa, considered a nonpareil delicacy when fried, smoked or cooked in mustard sauce, typically travels up the rivers Ganga, Brahmaputra and Irrawaddy from the Bay of Bengal during the rainy season to spawn.

The fish is also found in the Arabian Sea from where it goes upstream through rivers in Gujarat and Pakistan’s Sindhu river, as well as in the Persian Gulf, Red Sea, Vietnam and China seas.

The peak upstream migration of the fish coincides with the advent of Monsoon — July and August — and continues up to October and November, according to a 2017 report by the Central Inland Fisheries Research Institute.

The report had also suggested that a “bypass channel” be created in the western side of the existing navigational channel at the Farakka Barrage to facilitate natural upstream migration of hilsa.

The first phase of the Jal Marg Vikas Pariyojana covers the Haldia-Varanasi stretch, and aims at developing fairway and multi-modal terminals, strengthening of river navigation system and conservation works, the officials said.