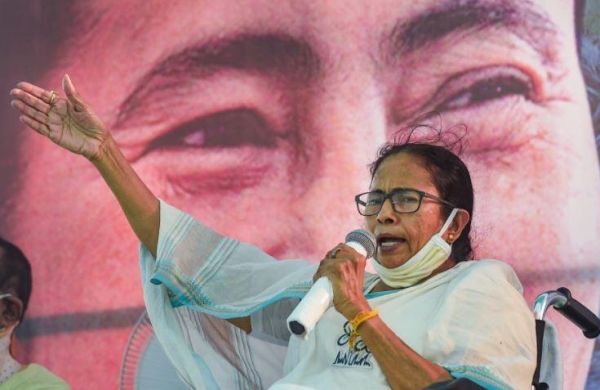 By PTI
KOLKATA: Accusing West Bengal Chief Minister Mamata Banerjee of issuing threats to its supporters in her rallies, BJP has registered a complaint with the Election Commission over comments made by her.

In its letter to the poll panel, BJP on Tuesday alleged, despite “pro-active” role of the commission, “large- scale violence” has been reported during past several days due to such utterances by the Trinamool Congress (TMC) chief.

To back up its claim, the letter mentioned a widely circulated video of a meeting addressed by Banerjee at Nandigram on March 29.

“In the meeting she said the central paramilitary forces will go one day, but she will stay in Bengal. Who will then save her rivals,” the letter quoted Banerjee as saying.

​ALSO READ | ‘Mamata has to be defeated to bring about much-desired change in Bengal’: Amit Shah in Nandigram

Raising objection to the TMC supremo’s remarks, the letter signed by BJP leaders Shishir Bajoria, Arjun Singh and Pratap Banerjee said, “Such statements are threat to free, fair and peaceful elections..and have been brought to the notice of the commission.”

The saffron party also described the speech as a violation of the model code of conduct that urges political parties to avoid offences such as intimidation of voters.

“Threatening and criminal intimidation is not only an abuse of free and fair polls but also a criminal act as well as an electoral offence which needs strong and immediate check,” the BJP said.

Referring to the video clip, the letter alleged that the Trinamool Congress dispensation has failed to prevent incidents of violence such as attack on voters, stopping polling agents from entering polling stations, targeting BJP workers in the run-up to polls and on the voting day.