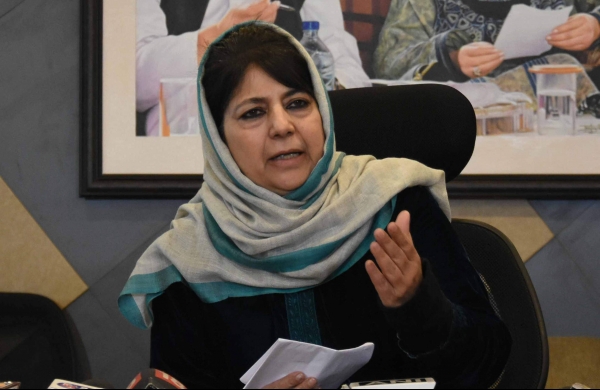 By PTI
JAMMU: In a major setback to the PDP, its senior leader and former MLC Surinder Choudhary on Tuesday resigned from the basic membership of the party, saying it has been hijacked by “drawing-room politicians, land grabbers and land mafia” members.

He said he was leaving the party because it has been hijacked and not under the pressure of any government agency.

He claimed the Peoples Democratic Party president Mehbooba Mufti is under the influence of such “few leaders” and was unable to distinguish between right and wrong and has deviated from the core agenda of ‘peace with dignity’ envisaged by party founder Mufti Mohammad Sayeed.

Flanked by dozens of his supporters whom he introduced as PDP functionaries from Nowshera and Sunderbani areas of Rajouri district, Choudhary said, “We all are resigning from the basic membership of the party.”

Those present endorsed his announcement by raising their hands.

“I am not leaving the PDP because of Mehbooba or under the pressure of (central) government or its agencies.” The former MLC told reporters here.

“We have been forced to take this step because the PDP has been hijacked by a few drawing-room politicians, land grabbers and land mafia (members) who have gathered around her (Mehbooba),” he added.

He, however, did not name any PDP leader whom he dubbed as “drawing-room politicians or land mafia (members)”.

Choudhary, who on March 17 resigned from the post of PDP general secretary and its political affairs committee within two days of the re-organisation of the party by Mehbooba after her re-election as party president, said the party post does not matter but the self-respect and honour do.

“When the PDP was formed by Mufti Mohammad Sayeed in 1999, we joined him to strengthen his hands and within a few years, the party formed the government (2002). Those calling the shots in PDP today were nowhere at that time. His agenda was peace through dialogue and bridge the gap between the communities and the regions and sub-regions,” he said.

He said Mufti’s rule was the golden era in the history of Jammu and Kashmir and paved the way for the revival of business, tourism and even the cross-border routes which benefited the public.

“His vision was supported by former Prime Minister A B Vajpayee and a ceasefire came into effect along the borders providing much-needed relief to the border residents,” he said.

Mufti’s vision that Indo-Pakistan dialogue was key to peace in J&K proved again as the Centre reached an agreement with the neighbouring country to adhere to the ceasefire after seven years of firing on the borders, he added.

He said Mufti left behind a party with grassroots-level supporters at every nook and corner of Jammu and Kashmir and Ladakh but “the PDP today is fighting to survive and is on the verge of extinction”.

“When Mufti left, PDP had five MPs including two in Rajya Sabha, 28 MLAs and 14 MLCs. The present position in the party is because of those drawing-room politicians and land mafia (members) who are influencing Mehbooba’s decisions and she failed to distinguish between right and wrong,” he ad+ded.

He said a large number of leaders with mass support left the party after Mufti’s death.

“Mehbooba never bothered to ask leaders why they were leaving the party. I have resigned from the two posts but she did not try to reach me. I am feeling bad because Mufti’s hard work is being wasted and his dream being shattered,” Choudhary said.

He said nobody pressurised him to leave the party.

“Nobody can pressurise us. I am leaving because of the leadership and not under the pressure of the government or its agencies. With folded hands, I request Mehbooba not to defame us, we were your and Mufti’s soldiers,” he said, adding the leaders are leaving because they are not able to reach her and put forth their point.

On his future plan, Choudhary said he is meeting his supporters in his home town Nowshera and Sunderbani and will decide whether he will join any other party or remain independent.

“Nowshera is the constituency where PDP could only win one District Development Council (DDC) seat in the entire Jammu division in the recently held elections. This is the constituency which is considered as the stronghold of the BJP as its J&K president belongs to this place. I will return to my people and my future strategy will be the reflection of their desire,” he said.