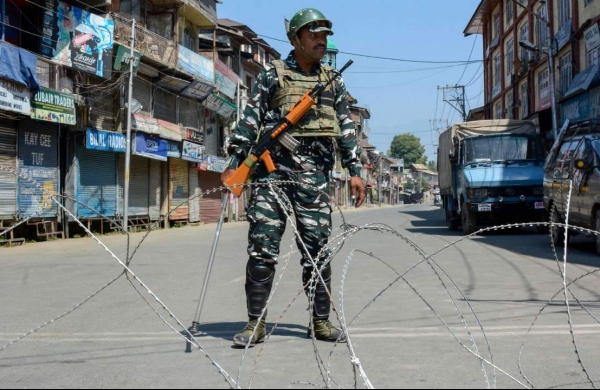 By Express News Service
SRI NAGAR: In the second terrorist attack in the Kashmir Valley in five days, terrorists on Monday stormed the building where an Urban Local Body (ULB) meeting was being held in Sopore town in north Kashmir’s Baramulla district, killing a BJP municipal councilor and a policeman. Another councilor was injured in the attack.

Police have blamed Lashkar-e-Toiba for the attack and also suspended four cops for not appropriately retaliating to the terrorist gunfire.

Militants fired from automatic rifles towards the Municipal Council Office, where the meeting of the councilors and chairperson of Sopore municipal council was being held in the afternoon.

Immediately after the militant attack, police, CRPF men and army men rushed to the area and launched a combing and search operation to track down the militants responsible for the attack. However, no arrests were made during the operation.

Meanwhile, in raids conducted in Kashmir’s Kupwara district, security forces have seized a cache of arms and ammunition, including five AK assault rifles, from an area close to the Line of Control, an army official said on Monday.

“In a major success to security forces deployed in Karnah, a huge recovery was made in the late hours of Sunday owing to high state of alertness of the army and police,” the official said. He said the security forces launched an operation based on specific intelligence input.

“The operation was conducted in very close proximity of the LoC in Dhanni village which is under direct observation of Pakistan Army posts in Lipa Valley,” the official said.