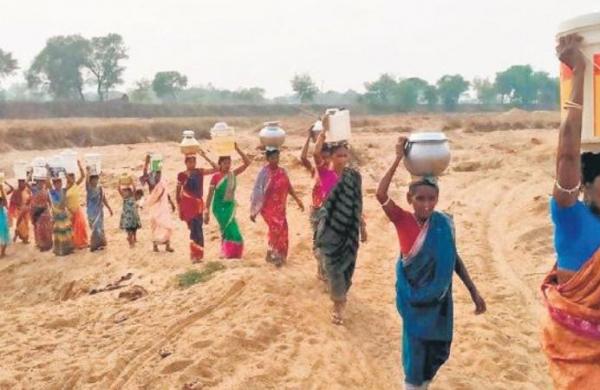 Express News Service
NEW DELHI: Geeta, 35, has little idea how she will start paying off her debt of Rs 20,000 that she borrowed from a moneylender in her village Umradara in Madhya Pradesh last year. The fewer number of daily wage days and the mounting interest have left Geeta clueless.

Geeta was among thousands of migrant workers who walked back home amid the lockdown.

“I walked back along with my husband and two children. We were lucky to have got space in a truck for a short distance. In December, I gave birth to my third child. Even after taking a loan in the lockdown, we could not afford the basics. Buying vegetables was a struggle. So far I have been unable to pay a single penny from the debt,” said Geeta who has returned to Ahmedabad for work.

Geeta’s story finds resonance among hundreds of women who have been severely impacted by the lockdown and have been pushed into debt.

Hiraben who works as a construction worker in Surat, and hails from Madhya Pradesh’s Jhabua has a loan of Rs 7,000 which she had to resort to in order to afford vegetables for her family of five.

“There was no work in the village, so I am back here. But the number of workdays has gone down. I work hard so that I can pay off the debt,” said Hiraben.

Last year, the United Nations said the impacts of crises were never gender-neutral, and COVID-19 was ‘no exception’.

“While everyone is facing unprecedented challenges, women are bearing the brunt of the economic and social fallout of COVID-19,” it said.

According to a UN analysis, around 435 million women and girls will be living on less than $1.90 a day by 2021— including 47 million pushed into poverty as a result of COVID-19.

Ranu Bhogal, Director- Policy Research & Campaigns, Oxfam India, pointed out the loss of livelihoods, and non-payment of wages have forced women to borrow money at a high-interest rate.

“Those who had borrowed money could not repay their loan which increased their debt burden. It is important to remember that a large majority of women are employed as informal workers- domestic workers, garment sector workers, home-based workers like bidi rolling and in small-scale manufacturing,” said Bhogal.

According to the Economic Survey 2018-19, over 90 per cent of India’s total workforce belong to the ‘informal sector’. Divya Varma from Aajeevika Bureau, an organisation working with migrant communities, observed women workers also have to shoulder the major burden of unpaid domestic work.

“Women’s nutrition also suffer majorly in times of economic shock as they are often the primary caregivers. Their loss of livelihood push them further to the margins,” said Varma.

An ActionAid report ‘Workers in the time of COVID-19’ released last year said women have few resources and depend majorly on their savings, and ‘more alarmingly on debt’, especially in situations of economic shock and uncertainty.

The survey showed 79 per cent of women reported that they were unemployed compared to 75 per cent of men during mid-May last year. The percentage of both men and women seeking work increased during the lockdown, it showed.

“What the government provided was just emergency food services, and that is not enough,” said Katiyar.

Bharti Ben, 40, and her husband had saved Rs 40,000. When the sudden lockdown was announced in India, they pulled these savings up to sustain their family of four.

Before the lockdown, Bharti eked out a living by working as a helper with wedding caterers. When the lockdown was lifted, she had no money left.

“First I pawned my jewellery to take a loan. With this, my husband and I tried to sell rangolis before Diwali. That did not work out. I took a cash loan to set up a vegetable cart. But we could barely make ends meet. Now, I have no savings, no work and no idea how to reclaim my jewellery. Instead, I have a debt which I do not know how I will repay,” said Bharti.

Labour economist K R Shyam Sundar observed female migrant workers suffer from a lower probability of getting and retaining a job as compared to their male counterparts.

“Women migrant workers unable to make two ends meet will try to exhaust the social capital to borrow money, thereby getting into a vicious cycle of debt. The government should have a universal basic income targeting women workers. The current uncertain COVID-19 situation affects the labour market disproportionately. The informal sector is characterised by heterogeneity, where female workers face greater vulnerability,” said Sundar.

The UN had recommended for governments to give stimulus funding specifically to women-owned businesses. It had also urged governments to protect the health, safety and incomes of vulnerable female workers, including those in the informal sector.