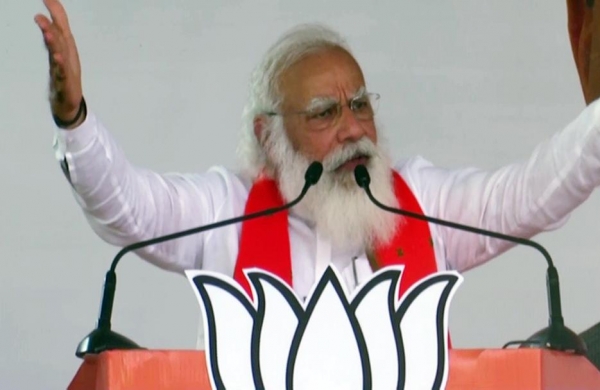 Express News Service
GUWAHATI: Slamming Congress for aligning with minority-based All India United Democratic Front (AIUDF) in the Assam elections, Prime Minister Narendra Modi on Wednesday said it was not a ‘maha jot’ (grand alliance), but ‘maha jhoot’ (big lie).He said Congress was focussed on capturing power with the vote bank of a party which prospered because of infiltration.

Modi alleged that Congress could do anything for votes. For example, he said, Congress is friendly with the Left in Assam, but wrestling with them in Kerala.“I have come here to awaken you. The hand of the Congress today is on such a force whose foundation is based on the principle of destroying Assam’s identity.

Will you allow your culture and tradition to be destroyed?” Modi said at a rally in Bihpuria in the district of Lakhimpur. “This is not ‘maha jot’. This is Congress and ‘maha jhoot’. Their Assam alliance neither has a philosophy nor culture. This alliance guarantees only infiltration and loot.” Modi claimed that the Kaziranga National Park had been freed from Congress-patronised captors.

Today CM Shivraj will be on a tour of Jabalpur, saying by tweet- Collector, SP and officials did not come to the airport to pick me up

India witness slight dip with 3.66 lakh cases within past 24 hours