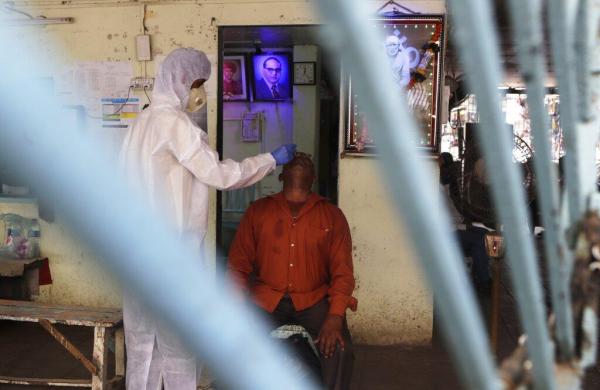 The daily death count was the highest since November 20 last year when 155 deaths had been reported.

Rest 35 deaths are from the period before the last week.

Meanwhile, amid a rise in cases, Mumbai’s civic body on Tuesday decided to set up two COVID care centres in Dharavi, one of the world’s densest urban sprawls, an official said.

The 250-bed COVID care centre at Vanita Samaj Hall in the area is full, the official said.

“We plan to set up a COVID care centre in Mahim Nature Park area, where the number of beds will be 100 to start with and will be gradually scaled up to 700.

The other CCC will come up in Vanmali Hall,” the official said.

Mahim Nature Park, however, has a teeming snake population and this may be a cause for concern, he added.

The official said another hurdle they are facing this year is that schools will not be available to convert into CCCs as exams in offline mode are scheduled across the state, and community halls are located in residential areas, where lack of isolation may be an issue.

The BMC on Tuesday also announced that Holi celebrations, on March 28 and 29, will not be permitted in both private or public places.

The civic body in a circular announced a ban on Holi celebrations in both private and public places.

Action will be taken against violators under the Epidemic Diseases Act of 1897 and Disaster Management Act, 2005, it was stated.

Bapat, in his letter, stated that Pune has been one of the worst-hit cities in the COVID-19 pandemic.

“The second wave of the infection has hit Pune harder than any other city in the country. From 4,587 active cases on February 11, the infections have more than quadrupled to 21,788 by March 12,” the MP said in the letter.

Pune is an education hub and the COVID-19 situation has impacted lakhs of students, causing deterioration in the human capital development of an entire generation, he said.

“Pune is also a key economic centre for Maharashtra. Continuing restrictions on businesses due to the second wave, have further dented Pune’s economy,” Bapat said.

He further said at the current rate of immunisation in Pune, it would not be possible to inoculate the entire population of the region or for people to develop herd immunity in 2021.

“We, therefore, request to increase Pune’s vaccination quota and open up vaccination for everyone above 30 years of age, to enable Pune to become India’s first COVID-19-free city,” the MP said.

Since the Serum Institute of India is in Pune, the proximity can fully be leveraged, he added.